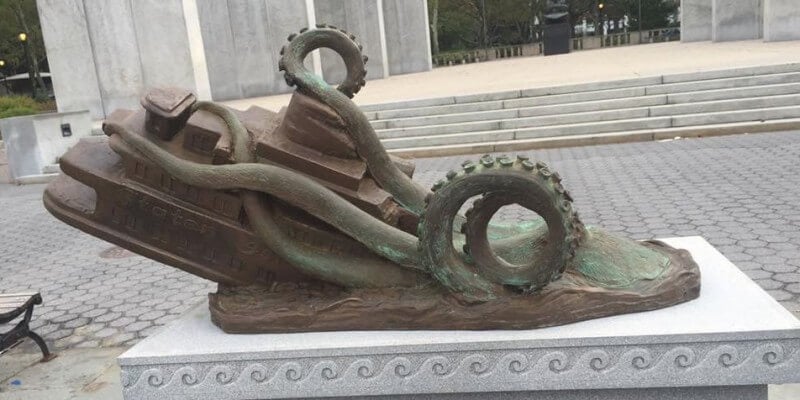 Little is known about the tragic events of November 22, 1963. No not THAT tragic event; we’re not talking about book depositories or assassinations, though THAT event is most likely why you’ve never heard of the Staten Island Ferry Disaster. This maritime mishap goes much deeper – 400 souls were supposedly lost that ill-fated November night in New York. It’s a monster of a story that would make even Captain Nemo cringe. A lone statue is all that remains to remind us of that fateful fish tale. Allegedly the Staten Island Ferry (some 400 full) was mysteriously and maliciously mangled by a giant octopus! Some say the story sounds fishy and they cannot wrap their minds (let alone 8 tentacles) around such cephalopod silliness. However, social media and the ever trustworthy weird wide web beg to differ (or is that defer?). It was close to 4am on the quiet morning of November 22, 1963 when the Steam Ferry Cornelius G. Kolff vanished without a trace. On its way with nearly 400 hundred people, mostly on their way to work, the disappearance of the Kolff remains both one of New York’s most horrific maritime tragedies and perhaps its most intriguing mystery. Eye witness accounts describe “large tentacles” which “pulled” the ferry beneath the surface only a short distance from its destination at Whitehall Terminal in Lower Manhattan. Nobody on board survived and only small pieces of wreckage have been found…strangely with large “suction cup-shaped” marks on them. The only logical conclusion scientists and officials could point to was that the boat had been attacked by a massive octopus, roughly half the size of the ship. Adding to the tragedy, is that this disaster went almost completely unnoticed by the public as later that day another, more “newsworthy” tragedy would befall the nation when beloved President John Fitzgerald Kennedy was assassinated. The Staten Island Ferry Disaster Museum hopes to correct this oversight by preserving the memory of those lost in this tragedy and educating the public about the truth behind the only known giant octopus-ferry attack in the tri-state area. –Facebook page dedicated to the disaster. Hoax or horror?  Judge for yourself.  For details (after all, the devil IS in the details ©)* surrounding this unfortunate incident swim on over to the Staten Island Ferry Disaster Memorial Museum website.  There you’ll find newspaper clippings that have been added to the site, documentaries and even a gift shop. For even more detail on this tragic social experiment, release the Kraken and
visit the source of this Lovcraftian, perfect for Halloween Monster Tale: Gothamist