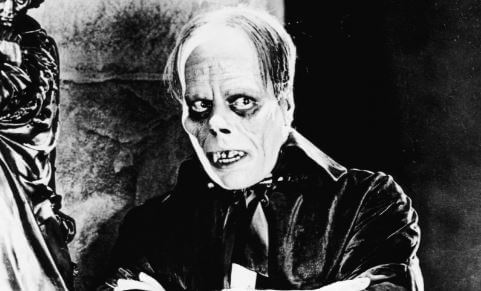 Recently restored footage from Universal’s classic 1925 monster movie Phantom of the Opera shows scenes with actual dialogue!  When Gaston Leroux’s 1910 novel Le Fantome de l’Opera was adapted by Carl Lemmele and Universal Pictures, “talking pictures” had not yet caught on and this classic horror film was released that November of 1925 as a silent picture.

It was not until five years later that film was re-edited and the text cards removed as sound was added to film.  There was one catch. Lon Cheney Sr.’s contract did not permit his lines to be dubbed so only his scenes in the film retained the classic text cards.  Of interest, is the addition of a new character used to lure Christine (Mary Philbin) to venture through the mirror into the Phantom’s chambers. The 1930 re-release was a success despite the absence of Cheney Sr.’s voice.  That success launched Universal on their epic adventure of classic monster movies.  Sadly, of the 1930 talking version, only the soundtrack and one of the five film reels survived, beginning with the infamous and deadly falling chandelier and culminating with Christine within the Phantom’s grasp.

In 1930, a sound version of the Lon Chaney Phantom of the Opera film was released. However Lon Chaney’s contract did not allow for his lines to dubbed over. Instead, the lair scenes still use text cards. For the mirror scene, they added a new character to be the Phantom’s “voice.” This is the only survivng reel. -YouTube