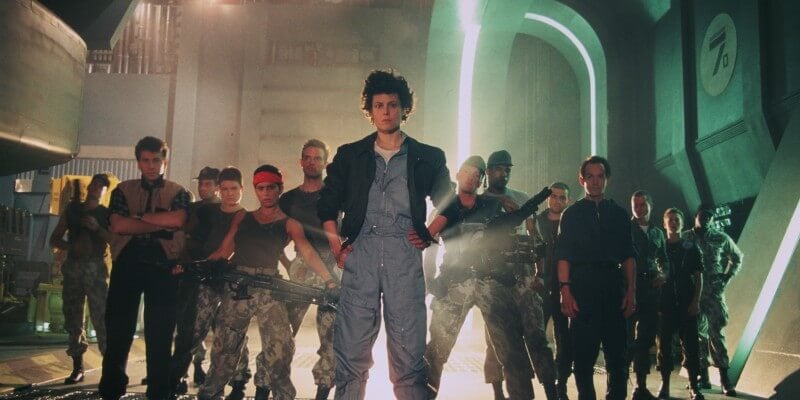 Somewhere in between repeated trips through The Great Movie Ride at Disney’s Hollywood Studios and a random action figure included in a Loot Crate subscription box, my seven-year-old son became a huge Alien fan. I’m talking HUGE. In his spare time he draws up epic battles scenes between these awe-inspiring creatures and with the new 30th Anniversary Edition of the legendary sequel Aliens, he now has even more inspiration in which to draw from with the inclusion of collectible art cards along with a mini book featuring art from the Dark Horse Comics Aliens series. All housed within a handsome slipbox featuring an all-new cover with some nice embossing, the actual Blu-ray disc appears to be the same transfer and indeed the same disc that was included with the Alien Anthology Blu-ray collection, but it is indeed an excellent transfer with little to no artifacts. Fans will just have to wait a little longer for a pristine 4K transfer (hopefully before the 57th anniversary) but there is admittedly little to complain with this current edition.

Of note is that the most of the special features, including a brand new featurette “The Inspiration and Design of Aliens,” which delves into the origins of the film with director James Cameron, are not actually included on the Blu-ray but rather on Fox’s website. That also includes pre-production galleries and a few other making-of featurettes, though deleted and extended scenes as well as previously released audio commentary are part of the disc, which includes both the 1986 theatrical version and the 1991 special edition that features most of these extra scenes and runs about 17 minutes longer. Also, the digital-only content can only be viewed up to 10 times and won’t be available to watch after December 31, 2019. (The code included in my review copy did not work on Fox’s site despite repeated tries, but I hope to get a new code from customer service so I can include my thoughts on the extra content, particularly the new featurette.) The artwork included in both the mini book and as individual high-quality glossy cards is fantastic, as my son can attest to, but it is presented with little context. Still, it’s a nice bonus to have and the entire package looks great on a bookshelf.

If you already own the Anthology edition, there may be little reason to splurge on this edition, unless you’re a die-hard collector (which I have no doubt my kid will be one day), but it’s a no-brainer for those who don’t already own the movie or want to pair it with the anniversary edition of the original. Aliens remains an essential part of any cinephile’s collection and this reasonably priced edition more than fits the bill.

Aliens: 30th Anniversary Edition is now available to purchase on Amazon and other major retailers. Comments Off on REVIEW: “Aliens” bursts through in new 30th Anniversary Edition on Blu-ray and Digital HD