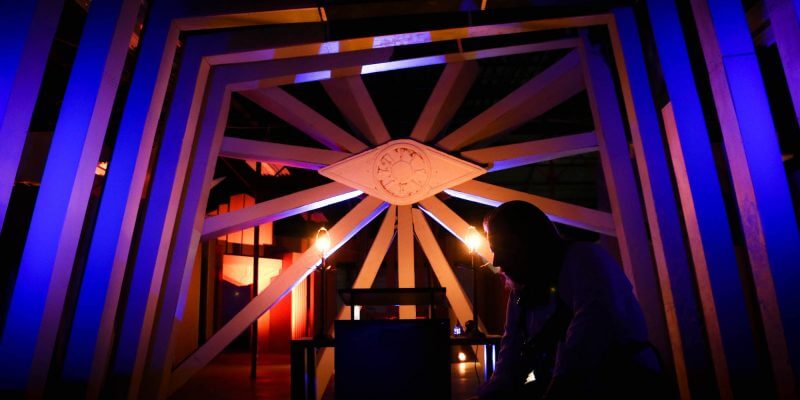 What happens when a secret society suddenly opens its doors to the public? Total chaos. That was the premise of ‘When Shadows Fall‘ – the newest immersive experience from Pseudonym Productions.

Called an “exciting new form of interactive entertainment,” When Shadows Fall combined live performances with clever interactions and fully themed environments to create an entirely unique experience for up to 40 participants, or players, at a time.

Throughout the 2+ hour experience hidden within a nondescript warehouse about 15 minutes south of Downtown Orlando and 20 minutes from Walt Disney World, players explored a hyperreal world filled with live actors, shocking visuals, cinematic lighting, and unexpected interactions all aimed at giving the feeling of taking part in a real-life video game.

If this sounds familiar it’s because it’s the follow-up to 2015’s highly successful immersive experience called ‘The Republic’ – also from Pseudonym Productions.

The Republic was Pseudonym Productions’ proof-of-concept that paved the way for this new and far more elaborate experience. The basics of The Republic were completely rewritten, ironing out the kinks of Pseudonym’s branching story system that was developed for When Shadows Fall’s precursor. Those who attended The Republic may have recognized a few familiar faces, characters, or story beats in When Shadows Fall, but beyond that the new experience was a vastly different one.

When Shadows Fall hijacked theater to create an avenue for unconventional storytelling, incorporating the audience into the story as main characters. Actors and audience members were equals in this collaborative, branching, ever-changing narrative that included multiple timelines and endings for maximum re-playability. In other words, the audience was in complete control of their journey, making choices and decisions that not only affected them, but also everyone around them. The experience was staged in Orlando over its 10-week run (July – September 2016), connecting more than 1,000 excited players, some of whom returned more than 10 times to try to see everything the elaborate world offered. One visit certainly wasn’t enough to see – or do – it all.

Players would leave their lives “on the outside” behind to join PENUMBRA, a living, breathing society brimming with corruption, sex, drugs, and vengeance to engage one-on-one with emotionally affective characters, eager to pull players out of reality, incorporated as essentials parts of this story. Finding clues and evidence, discovering secrets, unraveling mysteries, sneaking, hiding, spying, hacking, and even blackmailing others were all part of the experience. PENUMBRA was built on harmony and virtue, a society that hid in Orlando for nearly 3 decades, as the story went. But nothing inside was as perfect as it seemed, as it was crumbling in all sorts of thrilling ways.

With each visit, there were 14 entirely different roles players could choose from, each following its own unique path through the story, like a live choose-your-own-adventure. Some roles were more intense than others, offering something unique for every type of person.

Mashing up elements from immersive theater, gaming, and architecture, When Shadows Fall offered a stunningly real world to slip into for an evening, leaving each player with stories to share at the end. The carefully designed flow of the experience offered a natural and easy to become engaged with its actors, story, and environments, leaving players wanting to explore, converse, and play their parts in shaping the story of PENUMBRA. When Shadows Fall was created by Pseudonym Productions, a team of professional designers, engineers, technicians, and performers, many of whom hailed from the theme park industry, including talent from Walt Disney Imagineering and Universal Creative. But this experience was nothing like a theme park attraction.

Though it shared similarly elaborate themed environments filled with exciting interactive technology, When Shadows Fall was more like the ‘independent film’ of themed attractions – edgy and unique, but created by a small team with a big passion for it, created at a fraction of the cost of a typical theme park attraction. In designing each new immersive experience, Pseudonym Productions keeps these goals in mind, shying away from the everyday mass market entertainment of Orlando’s many theme parks and family-friendly attractions, instead designing specifically with more mature audiences in mind. Pseudonym’s stories and content push boundaries of politics, religion, and society itself to make players question their own beliefs, not only having a lot of fun participating but more importantly leaving with the desire to analyze the meaning behind the experience and feeling like it has truly affected them.

When Shadows Fall was a massive undertaking for such a small team – and Pseudonym Productions isn’t stopping any time soon. More uniquely thrilling experiences are promised in the months and years ahead. Those interested in staying on top of news about Pseudonym’s newest experiences should frequent PseudonymProductions.com. Note: I am the Technical Director and a Producer at Pseudonym Productions and, when not working on Inside the Magic, I helped to create When Shadows Fall. With many more plans for exciting and unique new live experiences coming to Orlando, I hope that you follow us for updates in the years to come.