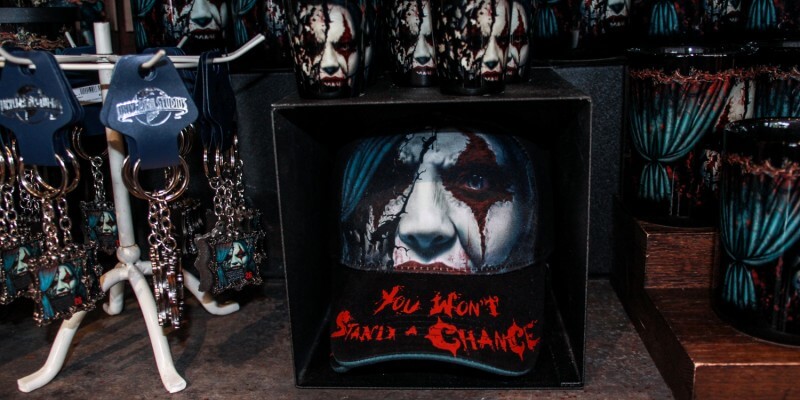 With a record SIX intellectual property (IP) themed haunts (American Horror Story, The Exorcist, The Walking Dead, The Texas Chainsaw Massacre, Halloween II, and Krampus) AND a psychotic mascot to usher in the annual Halloween event, there is no shortage of iconic imagery to draw from for spooky swag and creepy keepsakes. “Bloody” branded mugs, cups, keychains, t-shirts, postcards and collectables are just a few of the fiendishly fun finds in one of five different outlets around the park.  The main merchandise mecca near the park entrance as well as a smaller shop in front of the amphitheater allow for eager guests to grab a notion or few. For those looking for a truly spooky score, try one of the two prop shops. Within the walls of these treasure troves, one-of-a-kind keepsakes can be captured right alongside many of the specially themed items for the event.  (Note: if anyone is feeling extremely generous – there’s $1600 bust of Bella as Dracula that’s just begging to be part of my collection). Finally for the ultimate Horror Night Fan, there’s the Tribute store.  Located in the Macy’s façade on the New York set, this darkened destination not only features a few more event-centric items, but is an errie experience in itself. Lurking in the divinely dark-decorated, dimly lit location are life-size representations of many of the macabre mazes icons. It’s well worth wandering in for an added thrill, but don’t delay, once Horror Nights is over so is this Tribute store.