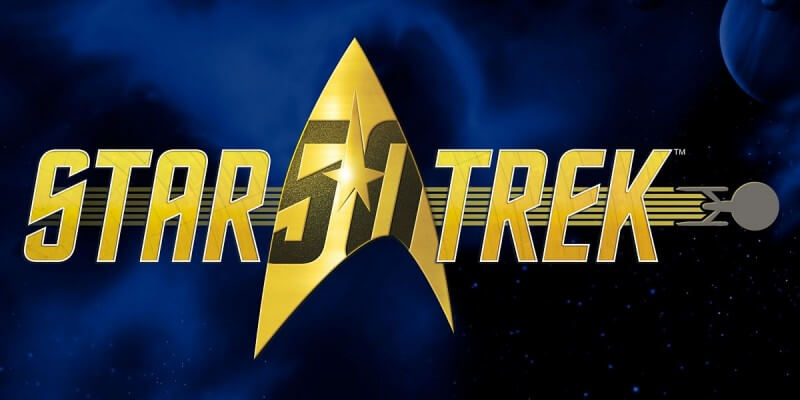 Fifty years ago today (September 9, 1966) Gene Roddenberry’s “wagon train to the stars” aired for the first time on NBC.  The iconic space-based series draped social issues and imaginative intellectual stories in a cloak of science fiction slipping many otherwise taboo issues past the strict guidelines of what was acceptable viewing in 1960s America.  The show ran for three short seasons, but maintained a strong following in syndication long after the series ended.

The first Star Trek fan convention was held in New York City in 1972, thousands turned out and started a trend of fan conventions that continues to this day.

Star Trek was reborn in animated fashion in 1975 for 22 cartoon episodes created by Filmation.

With the revival of science fiction/fantasy due to the resounding success of films such as Close Encounters of the Third Kind and Star Wars, Paramount dusted off a plan they had for a second TV series and Star Trek the Motion Picture was released for the Christmas season of 1979.  Six movies with the original series cast were released between 1979 and 1991.

The franchise was rebooted in 2009 with an all-new cast. Two sequels followed; Star Trek: Into Darkness (2013), and Star Trek Beyond (2016).  Though it has been a success at the box office, many die-hard fans feel the rebooted series lacks the depth of storytelling of the original series (focusing more on slick effects and action/adventure).

Collinsport Historical Society offered a delightful mash-up of Star Trek and Universal Classic Monsters with their Scar Trek parody (see all of the images HERE): On Thursday, Paramount released an emotional montage of the many faces the franchise has taken on over the past 50 years.

Has the Final Frontier found a place in your favorites?  What version, episode or movie do you prefer?  Have a favorite captain or character?  Beam your memories into the comments below.

Comments Off on 50 years of the Final Frontier: Celebrating Star Trek’s golden anniversary