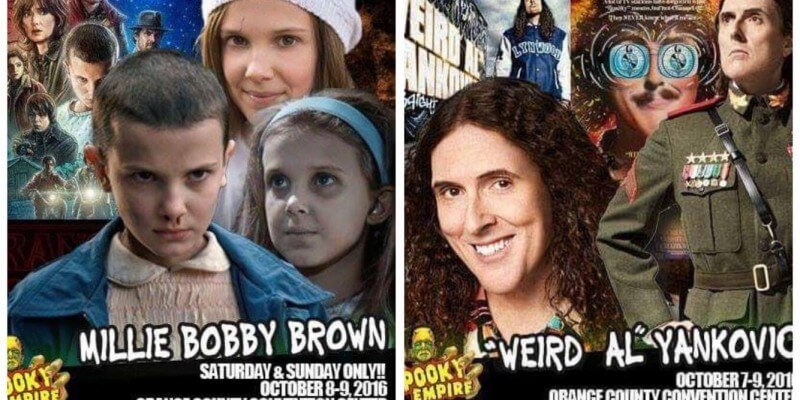 Two new guests have been announced for the upcoming Halloween and horror convention ‘Spooky Empire‘, that is returning to Orlando on October 7-9, 2016.

If you haven’t heard of the Netflix hit series “Stranger Things”, you must be living in the Upside Down. Spooky Empire is excited to announce that Millie Bobby Brown from the hit Netflix show will be appearing at Spooky Empire, October 8 & 9th, for two days only!

The petite actress currently stars as “Eleven” on “Stranger Things”. She’s also appeared as “Young Alice” in the ABC Once Upon A time spin off, “Once Upon A Time in Wonderland”, plus “Intruders”, “Modern Family” and “NCIS”. Next up on Spooky Empire’s guest list is the “weirdest” guest announcement for you all today!

Not that he needs much of an introduction, but you probably remember him for his pop culture parody songs and polka medleys such as “Eat It”, “White & Nerdy”, “Smells Like Nirvana”, “My Bologna”, “Like A Surgeon” and so many more.

“Weird Al” also has countless TV and film appearances including “UHF”, “The Simpsons”, “The Grim Adventures of Billy & Mandy”, “The Goldbergs”, “Adventure Time”, “Gravity Falls” and don’t forget he was in Rob Zombie’s “Halloween 2”!