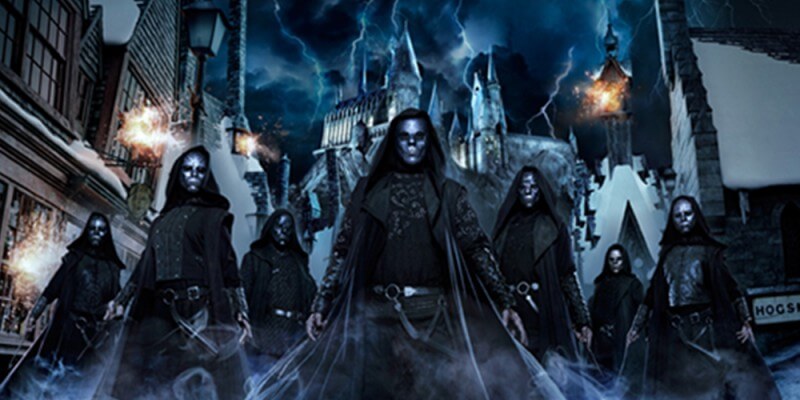 It was announced today through their official website that Universal Studios Japan will be holding the world’s first limited-time event since the opening of The Wizarding World of Harry Potter for a 54-day period, starting September 14, 2016 (Wed). The event will run during the same period as the 15th Anniversary Universal Surprise Halloween fall seasonal event, bringing guests a wizarding world they’ve never seen before.

Things are about to get dark

This fall for the first time, a new kind of entertainment will be offered, on an overwhelming scale and with meticulous attention to detail. The Dark wizards—The Death Eaters—appear and peaceful Hogsmeade will experience moments of darkness. This new, grand-scale piece of entertainment, exciting experiences, and new food are available for this fall only. Enjoy the Hallowe’en in The Wizarding World of Harry Potter that can only be experienced at Universal Studios Japan. “Death Eater Attack” joins the line-up as a new piece of entertainment at The Wizarding World of Harry Potter™. When night falls, this peaceful, cheerful world of magic transforms experiencing moments of darkness. The Death Eaters appear in Hogsmeade wearing black hoods and masks. Guests can experience the thrill and terror of coming face-to-face with the magical might of The Death Eaters, discovering an unprecedented feeling.

Trick or Treating in the Wizarding World

During the day, Magical Trick or Treat newly joins the line-up. Guests can experience a new kind of trick-or-treating in which Hogsmeade villagers will be handing out sweets to kids and guests. The village of Hogsmeade will be filled with the smiles of children enjoying the wonderful trick-or-treating. Produced on a grand scale that defies the imagination, and boasting overwhelming quality, this new piece of entertainment allows you to dive into an impossible world of magic from daytime to nighttime, bringing you a moving experience for this fall season only. New foods that let you further savor the world of Harry Potter are coming this fall. From early September, 2016, “Hallowe’en Dessert Feast”, a selection of the desserts inspired by Harry Potter and the Philosopher’s Stone, makes a new appearance.

“Hallowe’en Dessert Feast” selection ranges from mountain-shaped chocolate ganache treats to carrot cake, allowing guests to get their fill of cake and candies.

The spectacular Great Feast, which has been a big hit since its arrival, will also feature in Hallowe’en style. This limited-time special menu serves up a juicy pork rib platter with seasonal dishes for the fall season, including a pumpkin au gratin. Enjoy the high-quality atmosphere that can only be experienced at Universal Studios Japan.

So what do you guys think of the most evil forces in the Wizarding World coming to life before your very eyes? Would you like to see this come to the Hollywood and Orlando Universal Studios parks? Let me know in the comments below, and stick with ITM for all things magical!