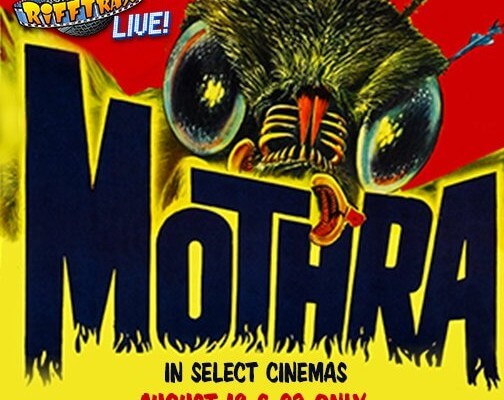 Entertaining only begins to describe what I saw. Rifftrax had their third live riff of the year last night when they riffed the 1961 monster classic Mothra! In case you don’t know what Rifftrax is, comedians Michael J Nelson, Bill Corbett and Kevin Murphy (who have been riffing films together since Mystery Science Theater 3000) make fun of a movie in front of a live audience while it is broadcast across the country in theaters nationwide.

Corbett, Nelson and Murphy kicked things off at the Belcourt Theater in Nashville, TN by riffing a short called Soapy the Germ Fighter, where an anthropomorphic bar of soap tries to convince a kid who hates cleaning himself named Billy that cowboys, who he idolizes, also use soap to clean themselves. Just by the title alone, you could sense this was going to a memorable one. Soapy not only gave Billy lessons on good hygiene, he also gave viewers nightmare fuel like you read about. Unseeing a giant bar of soap appearing in a little boy’s room is impossible now. Creepy. Kooky. Spooky: not just words that describe the Addams Family.

Nelson and the gang then got to the main attraction: Mothra. The best way to describe this monster movie from Toho Studios would be two small singing fairies from a mysterious island get taken by an expedition team and the giant moth herself rescues them while destroying miniature sets and toy cars. An oversimplification, but you’d have to see the movie to understand.

This was another hit for Rifftrax. Murphy, Nelson and Corbett didn’t miss a beat. The jokes were flowing smoothly and kept on coming. I’d say this was as good as their 2014 riffs of the 1998 Godzilla film or Sharknado. The bizarreness of Mothra lent itself to be riffed. It was almost like the director and crew for this movie had Rifftrax in mind when they were filming it.

“Yes, let’s call the movie Mothra and have the monster appear half way in the movie in an egg but only cause destruction in the last half hour!”

“Let’s have small fairies enter a stage on a tiny carriage!”

In case you missed it, there will be an encore presentation on August 23rd. Tickets are available here at Rifftrax.com/live

The guys also announced their next live riff: Carnival Of Souls on October 27th.