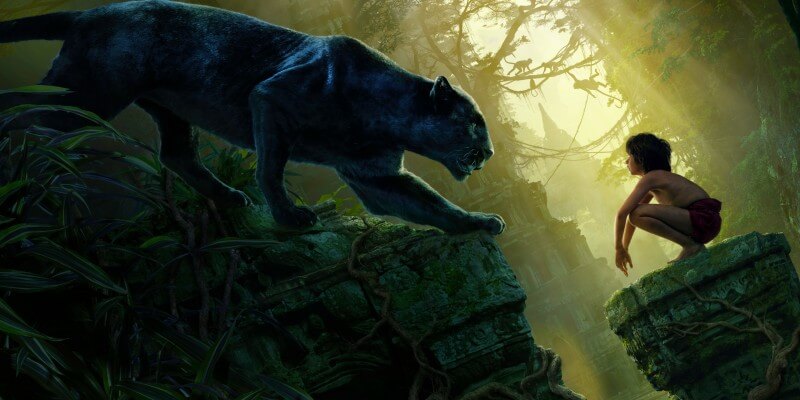 Disney’s smash hit “The Jungle Book” arrives on Digital HD and Blu-ray with a comprehensive collection of bonus features that is sure to please fans of the imaginative live-action remake.

Newcomer Neel Sethi leads an impressive cast of Hollywood stars that helped bring to life many of the iconic characters from the original 1967 classic under the guidance of director Jon Favreau. In many ways however, the story of how the project came together is a fascinating treat on its own. The Blu-ray packaging is standard fare, save for a nicely embossed slipcover, but the real goodies are in the special features starting with “The Jungle Book Reimagined” which clocks in at 35 minutes and features extensive interviews with the cast and filmmakers. Favreau sits down with producer Brigham Taylor and visual effects supervisor Robert Legato as they look back on the high-tech production which presented several storytelling challenges that necessitated technological advances to overcome, much like Walt Disney and his team were able to do so many years ago.

One highlight of the documentary is when they discuss crafting an “analog” opening and ending to a movie that relied so much on the latest tech.

Throughout the feature, it’s apparent that a lot of care was taken to preserve many of the elements of the original “Jungle Book” while also forging ahead with a new vision of Rudyard Kipling’s tales. Favreau’s attention to detail with working with Sethi to get natural, organic reactions to the action unfolding around young Mowgli was key to the magic of the photorealistic characters and the scenery itself.

There’s a ton of interesting ties to the original, such as how composer John Debney’s father worked with Walt Disney on the classic animated film, and there’s also touching moments including when legendary songwriter Richard Sherman went back to the recording studio to work on new lyrics for “I Wanna Be Like You”.

There’s also full-length audio commentary from Favreau, an eight-minute feature on how Sethi came to embody the role of Mowgli and a three-minute long “layer-by-layer” look at how the filmmakers created the King Louie’s Temple scene, complete with behind the scenes and raw footage.

The Digital HD release features the same collection of bonus features as the Blu-ray release. As for the movie itself, check out ITM reporter Mike Celestino’s film review from back in April when it first arrived in theaters. “The Jungle Book” is now available on Digital HD and Disney Movies Anywhere and arrives on Blu-ray Combo Pack, DVD and On-Demand on August 30.

Fans of the movie, or those who missed out the first time, can also experience the movie at select IMAX locations for a limited time only beginning tomorrow, August 26th through September 1st.