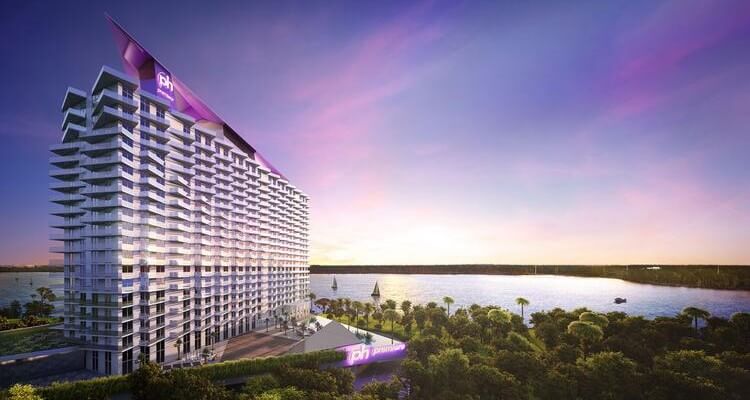 Plans have finally been filed with Orange County to construct a new Planet Hollywood Resort near Walt Disney World. The announcement of the hotel was made five months ago, but it seems as if a change has been made since that announcement. The establishment will still sit on close to 14 acres near I-4 on SR 535, but the number of rooms has increased from 436 to 548, according to the Orlando Sentinel. Lorenzo Fragala (with Azzurra Development LLC) is the lead developer on the project. His vision is a big one, hoping to bring elements of Miami, New York and even Vegas to the area and wrap them under the Planet Hollywood brand as a premiere resort. The documents submitted show an impressive accommodation that features a 20-story tower and roof deck, multiple restaurants, lake views and a volleyball court. Apparently there was no expense spared on the pool area either. Plans lay out a collection of cabanas and a boardwalk that accesses Lake Bryan. Bernardo Fort-Brescia,  principal of the architect firm enlisted for the project, believes the resort will “change the face of the city.” That’s a pretty bold statement considering all of Orlando’s offerings, and time will tell whether Fort-Brescia is actually the prophet he supposes.

Comments Off on Plans for Planet Hollywood Resort in Orlando changed