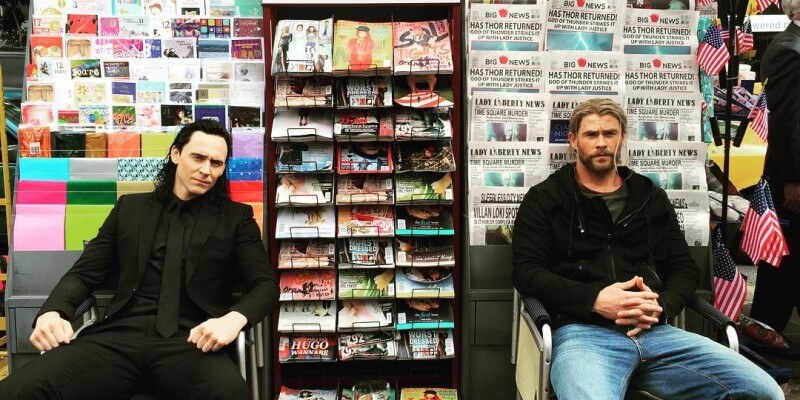 Marvel’s most famous brother duo, Thor and Loki, are back together again.

Production of the upcoming Marvel movie ‘Thor: Ragnarok” has picked up momentum in Australia and actors Chris Hemsworth and Tom Hiddleston reunited to shoot some scenes together out in the very public streets of Brisbane, Australia.

Hemsworth was nice enough to share a new photo on social media of him and the brother he loves to hate, Hiddleston returning as Loki. In the photo the actors are sitting in front of what looks like a New York City newsstand with some newspapers in the background that feature some very interesting headlines like “Villain Loki Spotted,” “Has Thor Returned!” and “Hammer Attack.”

Thank you Brisbane for letting us disrupt the traffic for our little film #ThorRagnarok in your beautiful city!!! pic.twitter.com/N9wDqBacL2 — Chris Hemsworth (@chrishemsworth) August 22, 2016

“Ragnarok” director Taika Waititi also decided to share some photos from the set in Brisbane.

Spoiler. @chrishemsworth will be appearing in Thor: Ragnarok. Sorry. #ThorRagnarok

Comments Off on PHOTOS: Chris Hemsworth, Tom Hiddleston reunite on ‘Thor: Ragnarok’ set out in the streets of Brisbane