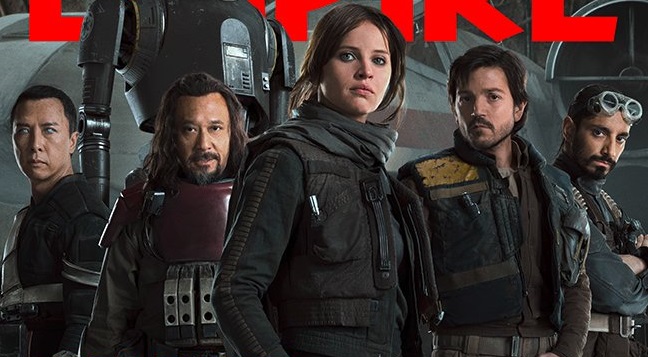 It’s still about four months away, but it’s safe to say “Rogue One: A Star Wars Story” is one of the most highly-anticipated movies of the holiday season, not to mention the entire year. The first live-action Star Wars movie without an episode number, “Rogue One” is the premiere installment in a new series of Star Wars anthology movies, sort of spin-offs from the main storyline that allows filmmakers to play around in lesser-explored parts of the galaxy far, far away.

Next week Empire magazine, a monthly British publication devoted to movies of all shapes and sizes, will release its “Massive Winter Preview” issue, featuring a new cover photo of the “Rogue One” cast. Inside the magazine, you can expect to read an in-depth and incisive account of how the movie, directed by Gareth Edwards of “Godzilla” fame, came to be.

The Winter Preview issue of Empire, featuring the “Rogue One” cast photo cover, hits newsstands next Thursday, August 25th. “Rogue One: A Star Wars Story” will be released in theaters December 16th.

Comments Off on PHOTO: Empire magazine reveals its “Rogue One: A Star Wars Story” cover