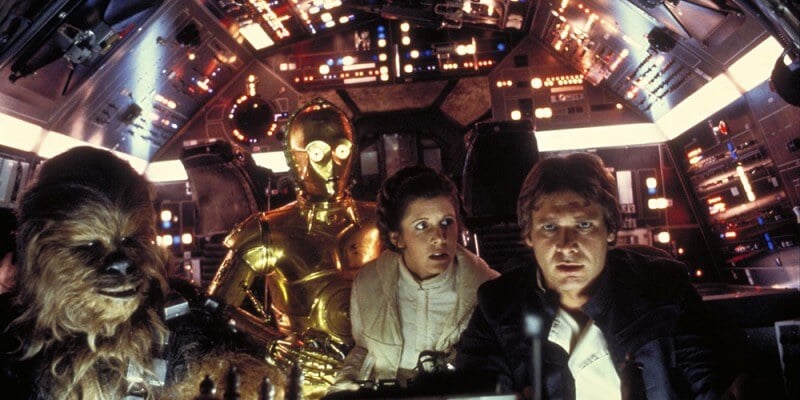 Last week on Twitter, the movie magazine Empire ran a poll asking fans to rank their seven favorite movies of all time, under the hashtag #fav7films. When the magazine published the results on their website, the list contained many predictable choices: “Pulp Fiction,” “The Shawshank Redemption,” “The Dark Knight,” and of course “The Empire Strikes Back,” situated squarely in the fourth slot. Not all Star Wars movies, in the way “The Godfather” and “Alien” series were lumped together. Just “The Empire Strikes Back.”

Whenever these discussions come up, I see people in comments sections asking why “Empire” is so highly regarded, why movie fans have long since settled on that installment being the far-and-away best of the series. And I can’t deny, I’ve always held a similar opinion– I’m a Star Wars fanatic in general, but “Empire” is without a doubt my favorite chapter in the saga. So I thought I’d take a look at why that movie, for me, works better and resonates more than the rest of the entries in a franchise that has generated countless enduring memories.

Fantasy is an escape from the real world. And in order for the viewer or reader (or player, when it comes to video games) to fully immerse his or herself in the world of a fantasy story, it simply has to feel real. “Star Wars” was a great start on accomplishing that daunting task, especially considering that it takes place entirely within a fictional galaxy. Viewers didn’t have the planet Earth or any other familiar touchstones to ground them in the story, other than human beings who are speaking a language they understand. So the universe created as a location for that story had to feel absolutely convincing. And it worked.

But “The Empire Strikes Back” goes one step further in that dedication to realism: it made it very difficult to see the seams. Whereas in “Star Wars” you had a handful of less-than-perfect visual effects (due entirely to budgetary constraints) and a few aliens in the Cantina that looked like they were wearing Halloween masks, “Empire” delivers 100% on the promise that the first movie got 98% right– an unconditionally believable fictional reality. Even Yoda, a character portrayed on-screen entirely by a foam-and-fabric puppet, looks and moves exactly as though you would image Yoda to look and move if he really existed. It’s an amazing feat.

When a studio greenlights a sequel to a successful action movie, the instinct is usually to go bigger. It happens almost every time: the explosions are more plentiful, the pace is quicker, and everything you liked about the first one is dialed up to the next notch, intensity-wise. “The Empire Strikes Back” takes the opposite approach, and it’s all the more beloved because of it.

Instead of throwing Luke, Han, and Leia into a non-stop thrill-ride as a follow-up to the first movie, “Empire” settles into its world. Sure, the battle of Hoth and the asteroid chase are breathtakingly electrifying sequences, but they’re surrounded by serene, almost-introspective moments that allow the viewer to drink in both the beauty and constant lurking danger in the universe George Lucas created. Some of my favorite parts of this movie are peaceful and inert: Luke wondering why he wound up stuck in the swamp, Han and Leia searching for a safe harbor in the Millenium Falcon’s computer system. You don’t tend to think of Star Wars movies as “quiet,” but those moments serve as an important counter-balance to the spectacle around them.

#3 – It has the best character moments.

“Star Wars” is an amazing movie, and as an introduction to the world and premise of the larger Star Wars universe, it works perfectly. But out of necessity, many of the characterizations in that first movie are surface-level and one-dimensional. Luke is a naive but hopeful farmboy. Han is a roguish scoundrel. Darth Vader is a bad guy. “The Empire Strikes Back” takes those character traits and runs with them, crafting those basic outlines into fleshed-out humans that we legitimately care about.

We’re sad when Han gets put into carbon freeze because the movie went through great efforts to turn him into a real person before that scene. We’re shocked when Darth Vader reveals the truth about Luke’s parentage because we’ve come to know about and be invested in the inner workings of both those characters– even Vader is given a moment of vulnerability in his meditation chamber earlier in the movie. We know Luke’s fears, his impulsiveness and hesitations, all building up to an emotionally loaded climax on that platform in Cloud City– one of the most famous character beats in movie history, with good reason.

#4 – It has the most interesting locations.

The ice planet Hoth. The swamps of Dagobah. The Cloud City on Bespin. Any one of these locations on its own would feel like a fully-realized, lived-in world, but the combination of all three sends a chill up my spine. I understand why the story had to start on the barren desert world of Tatooine, but that locale never did it for me like the desolate frozen landscapes of Hoth. But then again, I’ve always been a sucker for snow on film.

Bespin’s Cloud City isn’t as imposing as the Death Star from the first movie, but instead functions in the same way as the character of Lando Calrissian: welcoming at first, and then darker and more foreboding as the betrayal is revealed. The color palette of the carbon-freezing chamber is a beautiful, haunting mix of orange and blue that sears itself into your brain.

“Star Wars” could have been one movie. If it hadn’t been the surprise smash of 1977, a global phenomenon that helped ushered in the era of big-budget blockbuster filmmaking, “Star Wars” was designed to stand alone, just in case it had to– and don’t forget, the “Episode IV – A New Hope” subtitle wasn’t added until a later re-release. “Star Wars” has a beginning, middle, and a satisfying end where the rebels blow up the Death Star and everyone is happy. It wasn’t until “Empire” that the Star Wars galaxy was opened up into a universe of unlimited storytelling possibilities, and that’s a huge part of what makes it so great, to me.

A lot has been made of “Empire’s” downer of an ending, with Han Solo in captivity and the rebellion on the run, but I don’t see it that way. To me, “Empire” feels like a beautiful snapshot of that galaxy far, far away, and because of its middle-chapter status, the only one of the original trilogy to truly capture what it must have been like to watch the “Buck Rogers” and “Flash Gordon” serials that inspired Star Wars in the first place.

And finally, from a filmmaking perspective, “Empire” is simply the all-around best-made of all the “Star Wars” movies. It’s incredibly well-acted and well-directed. The effects work, production design, and musical score are all top-notch (the movie reportedly had twice the budget of its predecessor, and it has always felt to me like they used that money wisely and to great effect.)

One could argue that “The Empire Strikes Back” is the Star Wars movie that succeeds on its own terms, and not just because it’s a Star Wars movie. I adore Star Wars as a concept and I’m looking forward to being there in the theater for all the upcoming new installments, but I would say “Empire” is the only entry in the series that transcends Star Wars.