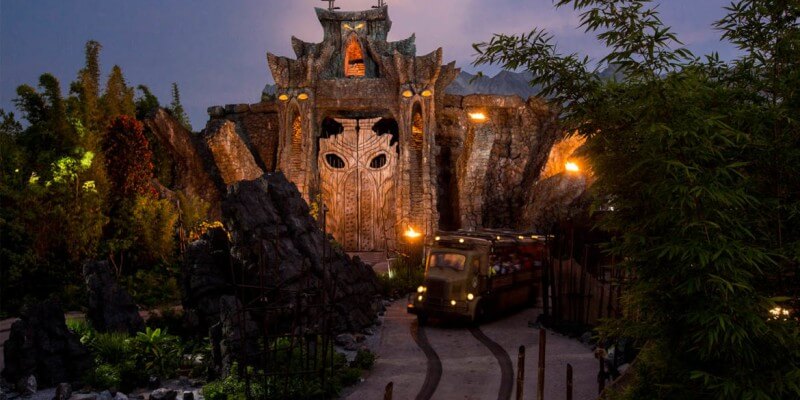 At Universal Orlando Resort’s rapid-fire media day yesterday, I had the opportunity to participate in an awesome Skull Island: Reign of Kong Q&A with Mike West, Executive Producer for Universal Creative.

For those who don’t know, the massive ride opened very recently at Universal Orlando’s Islands of Adventure theme park. The attraction itself is an extension of a very cool “tunnel sequence” at Universal Studios Hollywood where King Kong puts the smackdown on some dinosaurs. Now, here in Orlando, the experience is not only larger-than-life, it has been extended into a full ride complete with a giant “animated figure” (it was suggested that we not call them “animatronics”) of the giant gorilla himself!

Here are some of my personal favorite highlights from the Q&A:

Everything HAD to be massive

When I asked West what the biggest trial was in bringing this attraction to life, without hesitation, he said it was the scale. From the get-go, the mission with Skull Island: Reign of Kong was to create and simulate the grandeur of the fictional island itself. From the temple outside of the ride, to the giant swinging doors that actually work, to the ride vehicles, to a massive to-scale version of Kong — everything needed to be larger than life. It’s part of that “wow” moment when one happens upon the ride during their stroll around Islands of Adventure.

The additional screens and rooms complete the story

Let’s be honest: this ride wouldn’t be nearly as exciting if we didn’t have that attractive build up where we see the 8th Wonder crew being torn to shreds by the indigenous wildlife. It helps us understand the danger that surrounds us, and the acceptance that Kong may not be the most fearsome predator on the island. Telling that story was one of the most important mission that West and his team set out to fulfill. Oh, and he likes to call the queue (designed by Halloween Horror Nights rockstar Michael Aiello and his team) the “first part of the story.”

When West was describing the queue for the ride, he brought up some interesting points on the layout: There are some sections that are wide-open, and then you immediately go into a thinner corridor (where menacing scareactors lie in wait), and then things open up again. That was done with the intent of creating a sort of “pulse” throughout the line, like a heartbeat. Psychologically, it’s meant to rack up tension. Universal Creative had no problems bringing scareactors into the queue

Initially, there was a lot of controversy surrounding Universal Creative’s choice to bring terrifying, living natives into the queue to scare the tar out of people waiting in line. Angry mothers petitioned against it, worried that their children would be scared to death — basically the Internet was being “the Internet” about a thing. Luckily, West said that they had no qualms or conflicts bringing this section of the queue to the public. With the highly celebrated Halloween Horror Nights terrifying guests year after year, the team challenged themselves to bring that kind of experience to a different kind of attraction.

The trackless ride system was a “story-based” decision

After experiencing the immersion of the dark and creepy queue, the folks at Universal Creative didn’t want guests to get to the loading area, see a track below the ride car, and immediately become disillusioned or disconnected from the experience. They wanted to make sure that, when you climb aboard that Expedition Vehicle that there’s “nothing in front of you, but adventure.”

It took 18 months to construct the giant Kong animated figure

The most alluring point of the ride is actually at the very end when guests come face-to-face with a three-story-tall giant gorilla. If you are sitting on the right side of the ride car, you will only be a few feet away from King Kong himself, and it truly is a spectacle. When asked, West said that his team spent 18 full months creating this goliath, and the result is quite breathtaking. Easter Egg: One of the vehicle drivers is actually the nephew of Jack Black’s character, Carl Denham!

There are five trucks currently running around the island, All with different guest narrators. But one of those narrators has a direct tie in to the actual events of the movie “King Kong.” Now, in my last ride through, I heard our driver called himself a very familiar name: Will Denham. I immediately recognized that last name being that of Jack Black’s character from the 2005 Peter Jackson film (and all other iterations of the tale) “Carl Denham”. When asked, West confirmed that Will is indeed the nephew of the character who brings Kong to New York some years later. Apparently, after exploring the island, he tipped off his uncle to the wonders that the island beholds. So the important thing to take away here is, Skull Island: Reign of Kong is an actual, official prequel to the events of “King Kong”. How cool is that?! So that’s it! It seems like Universal Creative not only had a blast bringing the world of Skull Island to life, but did so to great success. The ride is open now at Islands of Adventure, and it truly must be seen to be believed. Feel free to check out our video of the full Q&A below, and stick with Inside the Magic for all things Universal Orlando!

Comments Off on New “Skull Island: Reign of Kong” details and surprises spilled by Universal Creative