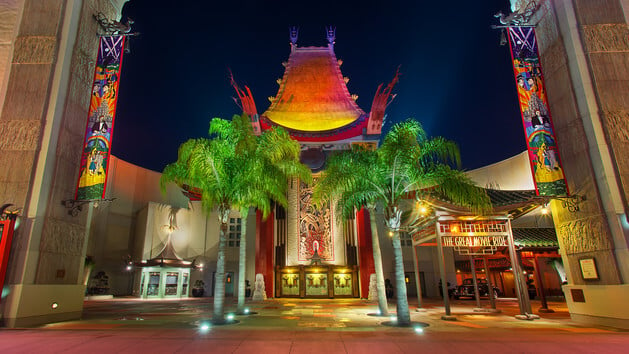 One of the oldest attractions at Disney’s Hollywood Studios at Walt Disney World is the Great Movie Ride, where you are transported into scenes of some of the greatest classic movies in history, like Public Enemy, Mary Poppins, Raider Of the Lost Ark, and Alien. It has been at the Park since it opened on May 1st, 1989.

Even though the ride was renovated and had a light makeover in 2015 with Turner Classic Movies sponsoring the attraction and TCM personality Robert Osbourne providing some of the narration for the ride, it feels a little dated. There has even been some talk lately about one of the oldest attractions at Walt Disney World, possibly even closing. I am a movie buff, but I know not many kids or even adults my age know about some of the movies featured in the attraction, like Footlight Parade or The Searchers.

So with that stated, if budget, movie and actor and actress likeness rights were not an issue (have you noticed the catalog from a certain movie studio that runs a rival theme Park across town is absent from this ride?), here are the movies I would include if I redesigned the Great Movie Ride!

OK, I’d keep the pre-ride queue the same, with props from various movies throughout history as well as the movie trailers of the films featured in the ride. This works well and sets the tone for the ride. I never had a problem with it. It is actually interesting to see how movie trailers have evolved over the years, from a voiceover telling you the entire story of the movie to now where it seems like they jump cuts and characters giving ominous dialogue over a BBWWWAAAUUUUUUUUMMMMM sound effect like in Inception or Iron Man 3.

I’d also keep the boarding area the same and keep the tour guide and Osbourne as the narrator. This really sets the tone for the ride and makes you feel like you’re about to be transported into the movies! One aspect I’d add to the ride is having the movie poster near the animatronic figures because some old movie posters are genuine works of art. Movie posters are a lost art form, in my opinion, because older ones used to tell a story as opposed to the seemingly rushed Photoshop jobs that are used today. OK, enough of my cinematic purist rant.

Ready when you are, CB!

The movie I’d Start With:

When you talk about movie history, you’ve gotta include this guy: the original movie monster, the Eight Wonder Of The World, KONG! This and The Lost World set the standard for stop motion animation and took the world by storm. I’d have the featured animatronic scene be the Empire State Building battle. Sure, tourists saw something like this at Kongfrontation at Universal Studios Florida, but imagine how Disney Imagineers could recreate this iconic cinematic scene!

Next up, I’d feature another notorious movie monster…

Frankenstein starring Boris Karloff is a horror classic. So many memorable scenes, like the grave robbing by Dr. Frankenstein and Fritz, the showdown with the villagers, and the Frankenstein monster, and this scene, which would be my choice for the animatronic segment. Here, I’d also mention Dracula, the Wolf Man, the Invisible Man, Creature From the Black Lagoon, and The Mummy.

After this segment, I’d keep the part where we come across John Wayne and Clint Eastwood from The Searchers and A Fistful Of Dollars; I’d also include another staple of the western genre.

This all-star cast featuring Steve McQueen, Charles Bronson, and Yul Brynner features a shootout that would certainly fit right in with the ride.

After the shootout, I’d then explore science fiction, and this is when the ride would kick into high gear. I’d keep the Alien segment but update the animatronics. Then I’d have the riders hit 88 miles per hour and get transported to the Twin Pines Mall in Hill Valley, CA, and be part of one of my personal favorite movies of all time.

Not only does Back To The Future have so many memorable lines, “Say hi to your mom for me.” “You’re telling me this sucker is nuclear?” “You are my density.” “1.21 GIGAWATTS!” “Hey, what the hell is a gigawatt?!?!”, a killer soundtrack with Alan Silvestri’s score and songs like “Earth Angel,” “Power Of Love” by Huey Lewis And The News, and “Mr. Sandman” by the Four Aces, it also has amazing special effects that still hold up to this day. I look at this movie and honestly wonder how they pulled off some of the effects shots, like the DeLorean disappearing and reappearing in the space-time continuum or the fire trail left after the DeLorean travels through time. And it’d be the DeLorean’s debut that I’d use as BTTF‘s scene. Of course, I’d also mention other notable science fiction movies from the ’80s around the time BTTF came out, such as Terminator, Predator, and Robocop.

I’d also spotlight the independent scene of the ’90s, which gave birth to the careers of Quinten Tarantino, Robert Rodriguez, and another director whose debut movie I’d showcase. First up would be a movie that really found its audience on home video and launched an entire empire. It took the Sundance Film Festival by storm. Of course, I am talking about Kevin Smith’s…

You can’t talk about the independent scene in the ’90s without talking about Kevin Smith’s 1994 debut movie about a day in the life of a counter clerk at the Quickstop Convenience Store in Leonardo, New Jersey. Say what you want about Marvel Studios; Kevin Smith really came up with the model of a cinematic universe with his View Askewniverse in Clerks, Mallrats, Chasing Amy, Dogma, Jay, and Silent Bob Strike Back and Clerks 2. I know there aren’t many family-friendly scenes, but this one here is a standout scene and would be completely fine.

After the Death Star construction worker debate is settled, I’d then focus on a movie that is life-changing once you see it. It features a character that knows a thing or two about bowling. He takes it easy for us sinners and has a friend who can get us a toe if we needed one. The one, the only…

Like Clerks, this classic by the Cohen Brothers in 1998 didn’t find its audience until it hit the home video and DVD market. To say this movie is life-changing begins to describe it. Jeff Bridges is incredible as the Dude. John Goodman is equally as great as Walter, and the dialogue is so great. I’ll let the Dude do the talking.

Now that the riders are acquainted with the Dude, I’d have them take a trip to the Atlantic Ocean and witness the greatest love story of the 90s…

If you were alive in 1997, it was law you saw this movie. There was no other way to explain how this wound up being the box office champion until Avatar came out in 2009. We knew how the movie was going to end, but we all went and saw it for some reason. There is only one scene that can be its animatronic portion.

After the boat sinks,  I’d take riders to the skies and explore the comic book genre with the movie that started the whole thing in 1978…

If you want to pinpoint where the comic book genre began, look no further than Superman: the Movie. It set the standard for comic book movies. First, you have a perfect casting with Christopher Reeve as Superman. His performance to this day holds up against the heavyweights of today with Robert Downey Jr as Iron Man, Chris Evans as Captain America, and even Ben Affleck as Batman. You also have a masterpiece of a score by John Williams (a top-three film score of all-time with Star Wars: A New Hope and Raiders Of the Lost Ark, if you ask me.) This film also made you truly “believe a man can fly,” as the tagline promised with amazing special effects. This also has snappy dialogue, and one particular line delivered by Lois Lane (Margot Kidder) from a memorable scene would be featured in its segment in the Great Movie Ride.

After Superman saves Lois from the helicopter, I’d make a brief mention of 1989’s Batman and 2000’s X-Men (cause let’s face it, we’ve got a show to do and riders have fast passed to use, and the clock is ticking!) and then show when the Marvel Age of movies dawned with a web-slinger making his big-screen debut…

While Superman: the Movie began the genre of comic book movies, Spider-Man kicked off the modern comic book era of movies. Director Sam Rami’s 2002 massive hit, which was the first movie to gross over $100 million in its opening weekend, is responsible for all the Marvel movies you’ve loved since. As for its segment, I’d choose a romantic moment between Spidey and the love of his life, Mary Jane Watson.

After seeing your friendly neighborhood Spider-Man and MJ make out in a back alley, I’d then go to 2008 and feature the most talked about the sequel in the past ten years…

Sure, 2005’s Batman Begins reinvigorated the Batman franchise. Still, director Christopher Nolan’s 2008 sequel took the genre to a whole new level with great action sequences (who could forget the opening bank heist?) and superb acting, especially by the late great Heath Ledger as the Joker. However, if there is one scene that stood out beyond the rest, it’d be the suspenseful interrogation room showdown between Batman and the Joker.

And of course, we all know Iron Man hit theaters that same summer, and that laid the building blocks for the Marvel Cinematic Universe, which lead to the cinematic event that was …

Like I said, this wasn’t just a movie…this was an event. A lot of you reading this remember the hype surrounding this movie. Captain America, Iron Man, the Hulk, Thor all together in the same movie! Like Spider-Man before it, Joss Whedon’s 2012 movie made cinematic history by BREAKING the debut box office weekend record by raking in over $200 million! Finally, after four years of hype and anticipation, it all came together in one scene…

Then, I’d have one more scene from probably the biggest movie to come out this decade. A movie that was hyped for over two years. And when it was finally released, boy, did fans love it…

Why has the final animatronic segment been the Force Awakens? I’d want to have the final segment exhilarating and make the riders leave on a memorable note. Plus, I’d want to end the ride with a current “great” movie instead of an old movie like how it currently does with the Wizard Of Oz. Plus, I’d want to give the ride a mostly linear narrative and show them this is how movies were and here is how they are now. As for the animatronic segment for the Force Awakens, I’d use the final battle between Kylo Ren and Finn and Rey.

After the final fight, I’d then end with a modified montage of famous movie clips, including stuff from Guardians Of the Galaxy, Batman  V Superman: Dawn Of Justice, Terminator 2: Judgement Day, Jaws, Dracula, Pulp Fiction, Goodfellas, then the tour guide would bring the riders back to the marquee, wish them all a wonderful day and tell them “And behalf on all of us, we’ll see you at the movies.”

So that is how I’d redesign the Great Movie Ride at Disney Hollywood Studios. I know my personal movie choices will be different from everyone else’s, so please chime in in the comments section and tell me what movies you’d showcase on your version of the Great Movie Ride.