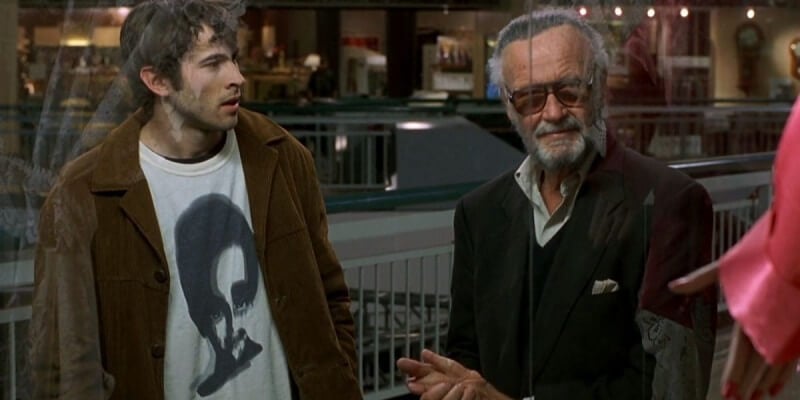 Every moviegoer in the entire planet could tell you Marvel Studios is the most successful studio in the business. Right now, Captain America: Civil War has made over $1 billion worldwide Innovating the movie industry with their shared universe concept of movies interacting and tying into each other, they set the standard for telling stories and showing other studios how a film franchise should be made. Certainly, no other studio has ever done something so ambitious, right?

Just wait a second. In fact, a small studio (in comparison to Marvel) did just that back in the 90’s and 00’s. Such a series of films were set in the great state of New Jersey and told the tales of two convenience store clerks, a comic book fan, two comic book artists and a woman questioning her faith. And let’s not forget two of the biggest mack daddies the world has ever seen.

Guess right? Anyone reading this who was around in the 90’s could’ve guessed it was the View Askew movies from the mind of writer/director/actor/podcaster and jack of all trades, Kevin Smith.

Yes, Kevin Smith. Leading the indie scene back in the 90’s with Clerks all the way through the mid 00’s with Clerks II, Smith built the “View Askewneverse” where Randall and Dante dreamt of better jobs, Jay and Silent Bob loitered their way through life and Banky Edwards fought off criticism that he wasn’t “a tracer” when it came to inking comics. One other movie in Smith’s filmography stands out from the rest. Right now, you’re probably thinking “That weird walrus movie from two years ago?” Don’t be ridiculous. I’m talking about 1995’s Mallrats.

Why Mallrats? Because looking at it now, it set the template for all Marvel Studios movies. Don’t believe me? Just look at all the evidence.

IT ESTABLISHED A SHARED UNIVERSE

Besides Jay (Jason Mewes), Silent Bob (Kevin Smith) and Brodie (Jason Lee), a few other characters from other View Askew movies either pop up or get name-dropped in Mallrats like Rick Derris (Ernest O’Donnell), who appeared in Clerks and was mentioned in an infamous scene in Chasing Amy…

…as well as Steve-Dave and Walt the Fanboy (Bryan Johnson and Walt Flanagan of AMC’s Comic Book Men and the podcast “Tell’em Steve-Dave”) who also appeared in Dogma, Jay And Silent Bob Strike Back and a deleted scene in Chasing Amy.

IT INTERACTS WITH OTHER MOVIES

Mallrats starts right off with T.S. Quint (Jeremy London) finding out someone who was supposed to be on his girlfriend’s dad’s game show pilot died the night before while swimming in a pool to lose some weight. That dead girl was Julie Dwyer, the same Julie Dwyer whose funeral was ruined by Dante and Randall in Clerks, thus establishing Mallrats taking place the day before Dante was called into work when he wasn’t even supposed to be there.

In the epilogue of Mallrats, it was revealed Brodie became the host of the Tonight Show. However, in Jay And Silent Bob Strike Back, viewers will notice a blowup of an article from Variety about Brodie leaving the show in the background.

Even Suzanne, the orangutan from Jay and Silent Bob Strike Back makes her appearance in the epilogue of Mallrats hinting at the adventures the trio go on in JSBSB.

And you thought the Thor reference in Iron Man 2 was awesome.

IT WAS THE FIRST MOVIE TO HAVE A STAN LEE CAMEO

Yes, Kevin Smith did it first. Stan Lee, the co-creator of practically half of the Marvel universe as we know it, who has appeared in most Marvel movies since 2000’s X-Men first did the cameo thing in Mallrats giving a heartbroken Brodie some relationship advice. (Lee even recently said his appearance in Mallrats was his favorite ever.)

Heck, even Michael Rooker, who was in Guardians Of the Galaxy as Yondu…

…was in Mallrats as the villain Svenning.

The Rooker one is a bit of a stretch, I know. While Mallrats might not have been a box office hit back in 1995, it found it’s audience on home video and DVD. So much in fact, Smith will be making a sequel TV series.

Marvel may be the kings of the box office with their shared universe and with all their movies interacting with one another and characters crossing over, but Smith and Mallrats did it first.