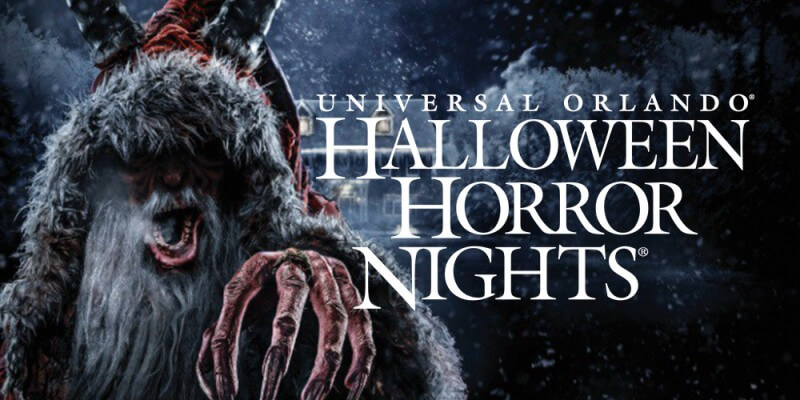 Universal Studios Orlando will be unleashing Krampus to steal your children and causing havoc at Halloween Horror Nights 2016! After teasing it last night, Universal Orlando has officially made the announcement Thursday with a new video.

Universal’s press release has some info on what to expect from this new addition to the lineup:

The dead of winter sets the stage for the terror that’s about to unfold one cold, dank and dreary Christmas Eve as the fabled anthropomorphic “half-goat, half-demon” horned creature emerges to terrorize those devoid of holiday spirit. In scenes lifted from the film, guests will navigate the dysfunctional Engel family home to encounter the evil ancient spirit of Krampus – the dark shadow of Saint Nicholas – and his band of Dark Elves and sinister Gingerbread Men, who cause the family to fight to see the light of day. The movie itself (by Trick-r-Treat mastermind Mike Dougherty) was a wonderful and fresh change of pace for the horror genre, offering chilling scares, practical effects, and of course, an insanely-frightening Krampus. For those who don’t really know, Krampus is basically the anti-Santa — if your children have been naughty, he steals them and you will never see them again. Imagine all the messed up imagery that can go with something like that when Michael Aiello and his team tear into the property this Halloween season.

For more info and how to get tickets for the event, which will take place at Universal Studios Florida on select nights from September 16 through October 31, click here for the official site. We will have more on Krampus as it develops, but make sure to stick with ITM for all things Universal Orlando!

Comments Off on “Krampus” is coming to Universal Orlando’s Halloween Horror Nights 2016!