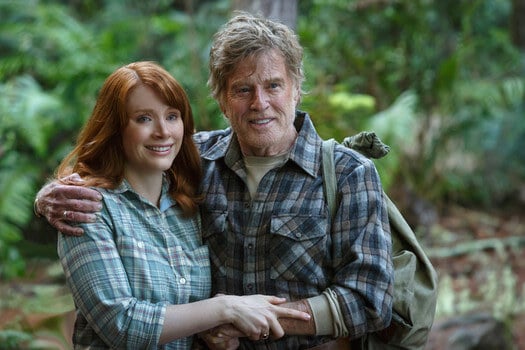 Live-action remakes of classic Disney movies is a hot trend right now and it won’t be long until Walt Disney Studios next venture, “Pete’s Dragon”, premieres later this summer.

Yahoo got an exclusive first clip from the movie spotlighting two of the movies majors stars, Robert Redford and Bryce Dallas Howard.

The sequence takes place shortly after park ranger Grace (Howard) discovers that a young boy named Pete (Oakes Fegley) has been living in the woods for six years — and claims to have a giant mythical creature there taking care of him. Grace is snooping around the office of her father (Redford) when he turns up.

It’s there she notices a drawing on the wall of a dragon he sketched for her when she was a little girl, and it’s awfully similar to the one Pete described… clearly setting up the idea that her dad has some history with the beast. Color us intrigued.

A remake of the 1977 film of the same title, “Pete’s Dragon” co-stars Wes Bentley and Karl Urban. The film is directed by David Lowery (Ain’t Them Bodies Saints), from a script by Lowery and Toby Halbrooks. It opens nationwide Aug. 12.