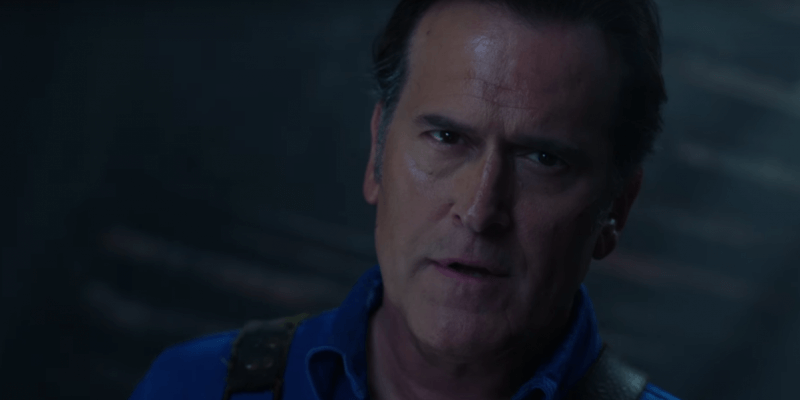 For just about every single diehard Evil Dead fan in the world, season one of Ash vs. Evil Dead felt like a welcome homecoming. Hell, it felt like Evil Dead 3 (or 4, if you count Army of Darkness…which the show legally can’t do). The point is, it felt like the next great chapter in the journey of our hapless hero, Ash, and Bruce Campbell still has that smarmy snark on-lock!

Now, it looks like season two is not only looking to raise the bar, but looking to explore Ash’s past — something we’ve never ever done in this series. By the looks of things, all hell breaks loose in Jacksonville, Florida and our three heroes are whisked off to the place where it all began, Ash’s hometown.

Bring it on, baby:

“Ash vs Evil Dead” follows Ash, the stock boy, aging lothario and chainsaw-handed monster hunter who has spent the last 30 years avoiding responsibility, maturity and the terrors of the Evil Dead. When a Deadite plague threatens to destroy all of mankind, Ash is finally forced to face his demons –personal and literal. Destiny, it turns out, has no plans to release the unlikely hero from its “Evil” grip.

Looks pretty groovy, huh? Ash vs. Evil Dead season 2 premieres on Starz this October, and you bet we will be the first to drop all the gory details on you this Halloween holiday season!

Comments Off on VIDEO: “Ash vs. Evil Dead” Season 2 trailer is here — and it’s bloody perfect