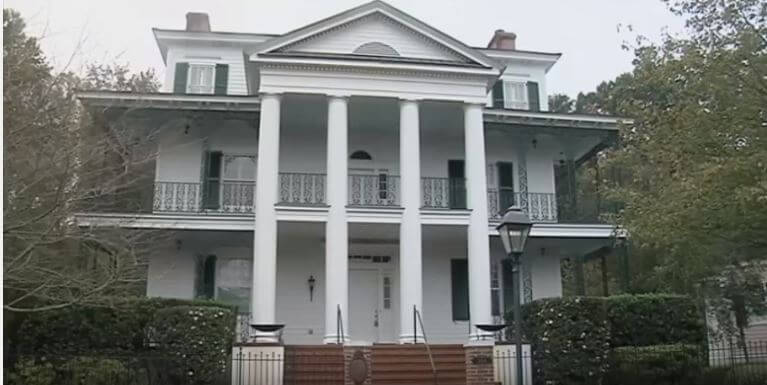 Well, sort of. Just outside of Atlanta in the Sweet Bottom Plantation subdivision of Duluth GA is where Mark Hurt built his home in 1996. Hurt is a Disney contractor who wasn’t thrilled with the options of the newly opened Garden District of this subdivision, so he decided to create his own.

Based on the original blueprints and measurements of Disney’s New Orleans Square Haunted Mansion, Hurt’s 10,000-square-foot mansion resembles the classic attraction right down to the iron work from the same foundry Walt used.  There’s even a red brick gateway with the famous Mansion plaque. The resemblance resides on the outside of the Antebellum home only.  Inside are no less than seven bedrooms, six bathrooms, and elevator (no stretching portraits) and a majestic two-story library featuring a gas fireplace and wet bar. For the most part there aren’t hot and cold running chills, with the exception of a special bathroom on the first floor.  Turn on the hot water in that particular powder room and the lights will flicker and dim revealing an extra ethereal guest staring from the other side of the mirror. Turns out, Ezra IS included in the sale of the home. Comments Off on Surreal Estate: The Haunted Mansion . . . for sale?