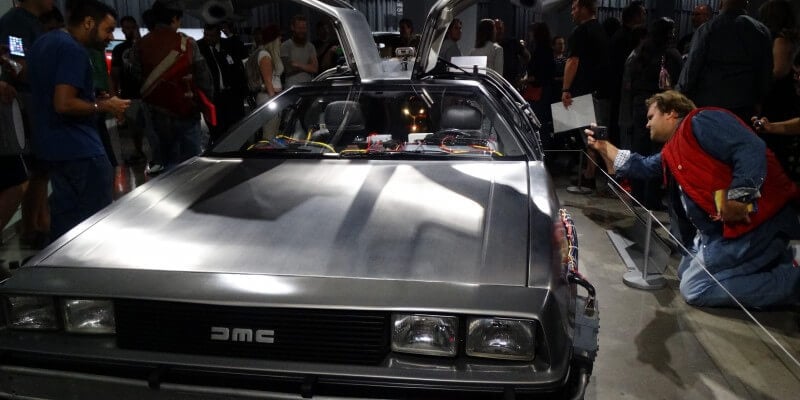 “The way I see it, if you’re going to build a time machine into a car, why not do it with some style?”

With those immortal words, Dr. Emmett L. Brown introduced Marty McFly– not to mention audiences around the world– to what would become arguably the most famous and iconic screen vehicle in all of cinema history. The DeLorean time machine is instantly recognizable to movie fans of all ages, and for many years devotees of the “Back to the Future” trilogy made the pilgrimage to its home at Universal Studios Hollywood just to be in its presence.

After baking in the Southern California sun for several decades, the DeLorean has been restored from its dilapidated state and it has recently settled into its new home at the Petersen Automotive Museum in Los Angeles.

Now an hour-long documentary about the vehicle’s extensive refurbishment process, entitled “Outatime: Saving the DeLorean Time Machine” is making its way to the home video market, and it seems destined to become an essential part of any “Back to the Future” fan’s collection.

“Outatime” originally premiered this past October as part of the “We’re Going Back” “Back to the Future” anniversary / 2015 arrival date event at Universal, and a 20-minute edited version of the documentary was also included as a bonus feature on the 30th anniversary edition Blu-ray release of the trilogy.

This month the full-length version of “Outatime” will finally become available to the general public, and the Petersen Museum held a gala release event and screening (in the presence of the time machine itself, of course) to celebrate the occasion. I had the pleasure to attend the event and overall I’d say I enjoyed the documentary.

WATCH THE UNVEILING OF THE DELOREAN AT THE PETERSEN IN APRIL:

As an information delivery system, “Outatime” works perfectly. Anything you could possibly want to know about what it takes to restore a 30-plus-year-old DeLorean, and reinstall all of the modifications that made the time machine special in “Back to the Future,” is presented in a clear, concise manner. As a documentary, however, the movie often feels a little too manufactured.

The influence of reality television has been reverberating through the world of documentary filmmaking for well over a decade now, and “Outatime” is a prime example of that phenomenon’s end result. Director Steve Concotelli has assembled his footage into something resembling an extra-long episode of “American Chopper” or “Mythbusters,” and he sometimes tends to overemphasize the ticking-clock mentality of the restoration’s approaching deadline and the dictatorial attitude of the team leader Joe Walser. The elevator-rock score is overbearing and the interview segments frequently come across more as hunts for repetitive soundbytes than authentic conversations about such an important event in film history.

None of these are necessarily dealbreakers, but I’d say “Outatime” would feel more natural airing on TLC than playing on a big screen in a grand movie-premiere setting. Unfortunately the 64-minute documentary never quite manages to transcend its bonus-content beginnings.

But despite all that, for die-hard fans of “Back to the Future,” the sheer amount of knowledge and trivia in the content of “Outatime” is ultimately too difficult to resist. This is one of those situations where your own personal interest in the material is going to dictate how much you enjoy the final product. If you approach this movie simply wanting to learn the 30-year history of the world’s most famous movie car, I don’t think you’ll be disappointed.

“Outatime: Saving the DeLorean Time Machine” will be available everywhere on Tuesday, July 19th. You can pre-order the Blu-ray and/or DVD on the movie’s official website.

Comments Off on REVIEW: “Outatime” documentary chronicles restoration of original “Back to the Future” DeLorean time machine