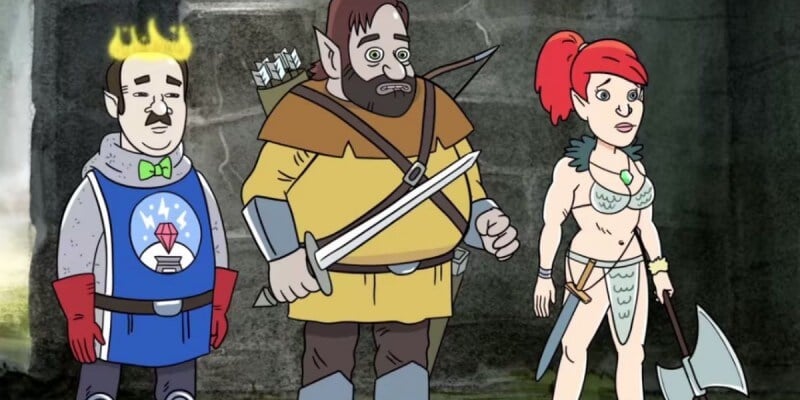 Fans of Dan Harmon, creator of cult-favorite NBC sitcom “Community” and co-creator of Adult Swim’s hilarious scifi adventure series “Rick and Morty,” know how much he’s into role-playing games. For years, Harmon and friends (including Jeff Bryan Davis of “Whose Line Is It Anyway,” comedian and Dan’s now-ex-wife Erin McGathy, and the indispensible game master Spencer Crittenden) played Dungeons & Dragons-esque fantasy adventures on their very popular podcast “Harmontown.” Even “Community” had two full episodes devoted to D&D and its ability to help confront and ease real-life struggles via escapism.

Now the role-playing segment of “Harmontown” has been spun off into “HarmonQuest,” a sitcom-length live-action-meets-animation series that debuted this week on the NBC-owned comedy streaming service Seeso. The first episode is also available now to stream for free on Amazon.

“HarmonQuest” takes all the familiar ingredients from the gaming in “Harmontown”– fun riffing on the fantasy genre, jokes about how ineffectual the characters are at achieving their goals, Spencer’s genuinely well thought out story design, and guest stars (in this episode it’s the always-uproarious Paul F. Tompkins of “Mr. Show” and “BoJack Horseman”) — and spins them into something new and fresh.

The show opens with a brief animated history of role-playing and its place in American culture, narrated by Crittenden, and then reveals a black-box theater setting (complete with a raucous live audience) where Harmon and his guests have gathered around a snacks-laden dining room table. And that’s where the action begins, as we cut away to full-animated segments that illustrate the tale and character interactions as described by the performers.

If I have one minor complaint about “HarmonQuest,” it’s that the editing style is a little too manic, especially in its first few minutes. I would’ve liked the show to take just a little more time to settle in with the comedians in the theater and establish the rules of gameplay before setting off on its adventure. But once the titular quest gets underway, the pacing finds its rhythm and the narrative becomes easier to keep up with.

Overall, however, “HarmonQuest” delivers on its promise: fast-flying jokes, high-concept medieval mirth, and sword-and-sorcery exploits of every variety, including encounters with monsters, demons, and enchanted gemstones. If you’re a fan of that genre of role-playing game, or even just that brand of storytelling, and have a thing for Dan Harmon and friends’ specific quality of improvisational comedy, “HarmonQuest” just might be for you. I certainly enjoyed it quite a bit.

The first episode of “HarmonQuest” is available now to stream on Seeso and Amazon.

Comments Off on REVIEW: “HarmonQuest” delivers fast-paced role-playing fun from the creator of “Community,” “Rick and Morty”