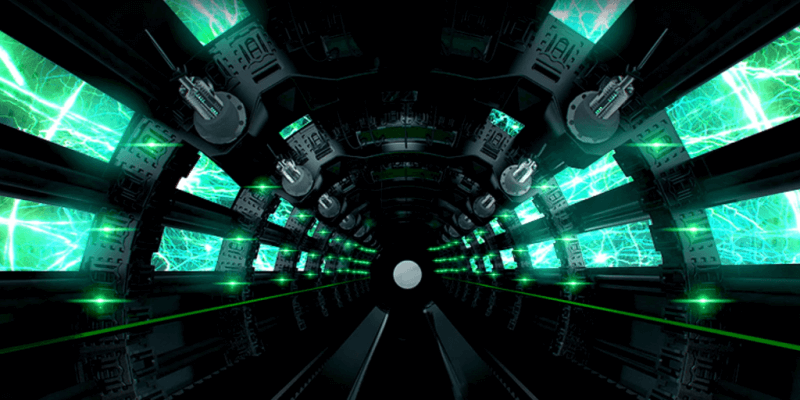 Are you prepared to ride one of Orlando’s greatest roller coasters in virtual reality? Well, it looks like Universal Orlando Resort is looking to take on some new technological advancements with the Incredible Hulk roller coaster, soon to be reopening at Islands of Adventure.

Orlando Informer reports that a simulation is currently available to all guests in the Toon Lagoon Amphitheater — it was originally only open to team members. So what goes on in this 2000-seat venue? Basically, guests are seated in the stands by Hulk Team Members, the tech is explained, and then they are whisked behind the stage curtain to begin the experience. Once inside, guests will find themselves in a dimly lit room with rows of plain chairs with a virtual reality headpiece and connected headphones on it. Then you just put those beauties on, and the experience begins! This was our buddy Taylor Strickland’s experience (from Orlando Informer):

The virtual reality demonstration is very short, but is immersive all 360 degrees you can look. The first scene takes place in a laboratory (presumably located within the state-of-the-art military research compound the ride’s redesigned queue is set in). Upon looking around, guests see plenty tones of green in what appears to be Gamma experiments and possibly the Gamma core itself.

The second scene takes place in a virtual version of the redesigned ride’s launch tube, known as the Gamma accelerator. This scene makes the guest feel as if they have been harnessed into the coaster and are being launched. It is designed very similarly to the concept art previously shared by Universal. A new voice and audio track replaces the ride’s famous “I think this time… it’s going to work!” Shortly after launching, the virtual experience fades to white into the next scene. The third and final scene seems to be the longest, featuring a variety of 3D renderings of the coaster operating.

While reasoning for this particular testing operation has not been explained, there’s a very good chance it’s being used for a possible VR experience while on the actual Incredible Hulk roller coaster. The technology is already being implemented in rides like Superman The Ride at Six Flags New England. While VR isn’t a perfect technology (I currently have an HTC Vive in my own home), it’s certainly well on its way and pioneering new ways for theme park guests to enjoy their experiences!  So for those who tend to complain about 3D rides or “screens” being used in place of practical effects, I’m sure you’ll have plenty of opinions to share.

So what do you folks think about Universal Orlando (or other theme parks) possibly incorporating virtual reality into their attractions? Let me know in the comments below and, as always, stick with ITM for everything fun and awesome!