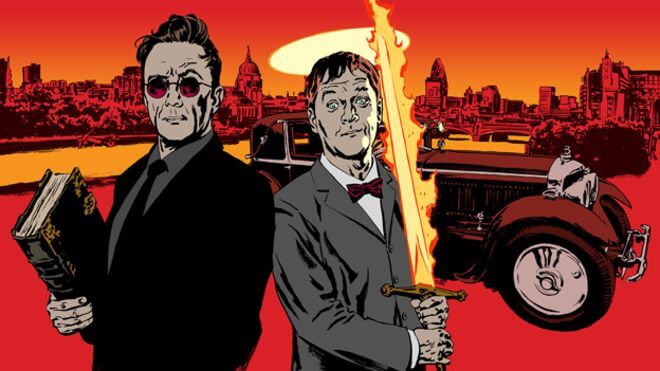 Neil Gaiman plans to bring the dark comedy Good Omens to television. Co-authored with the late Terry Pratchett, the novel was first published in 1990. The story centers around the birth of the son of Satan and end of times.

According to The Nice and Accurate Prophecies of Agnes Nutter, Witch (the world’s onlycompletely accurate book of prophecies, written in 1655, before she exploded), the world will end on a Saturday. Next Saturday, in fact. Just before dinner.

So the armies of Good and Evil are amassing, Atlantis is rising, frogs are falling, tempers are flaring. Everything appears to be going according to Divine Plan. Except a somewhat fussy angel and a fast-living demon—both of whom have lived amongst Earth’s mortals since The Beginning and have grown rather fond of the lifestyle—are not actually looking forward to the coming Rapture.

And someone seems to have misplaced the Antichrist . . . –Amazon BBC 4 adapted the off-beat comedy as a radio drama in 2015 (purchase here) and it was even considered as a motion picture to be directed by Terry Gilliam (starring Robin Williams as the Aziraphale and Johnny Depp as Crowley). Sadly the project never got off the ground. “God does not play dice with the universe; He plays an ineffable game of His own devising, which might be compared, from the perspective of any of the other players [i.e. everybody], to being involved in an obscure and complex variant of poker in a pitch-dark room, with blank cards, for infinite stakes, with a Dealer who won’t tell you the rules, and who smiles all the time.”  – Good Omens

Gaiman announced his plans for the six-part mini-series at the memorial service for co-author and friend Terry Pratchett last year. Who do you think should star in Neil Gaiman’s mini-series adaptation of Good Omens?  Leave your comments below.