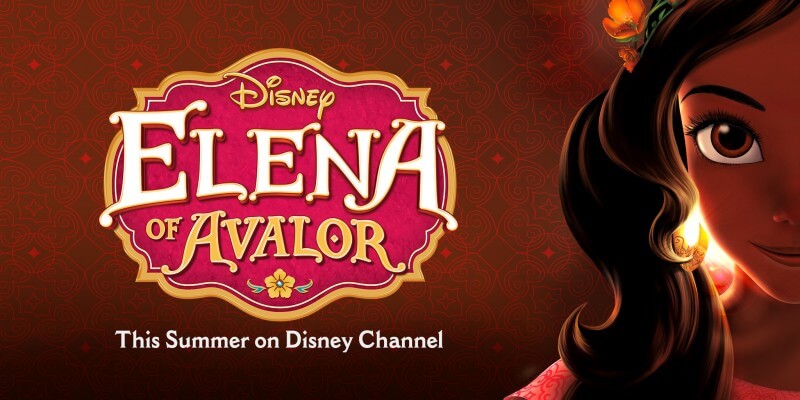 The premiere of “Elena of Avalor” on July 22nd will be presented simultaneously on Disney Channel and Disney Junior, and will include special previews of upcoming Disney feature films. Check out the press release below for more details.

The premiere will include two consecutive episodes of “Elena of Avalor” on Friday, July 22 (7:00-8:00 p.m. EDT). “Elena of Avalor” is the highly anticipated animated series that will introduce a princess inspired by diverse Latin cultures for the first time.

The “Elena of Avalor” premiere will include previews of these upcoming films: A telecast of the worldwide sensation, Walt Disney Animation Studios’ animated feature “Frozen” (5:15 p.m.) will lead in to the “Elena of Avalor” premiere (7:00 p.m.). Both timeslots will include a first look at the upcoming animated short-form series “LEGO Frozen Northern Lights” featuring Anna, Elsa, Olaf, Kristoff and Sven on an epic adventure to restore the glimmer of the Northern Lights. “Lego Frozen Northern Lights” premieres in November on Disney Channel. The exclusive television premiere of a captivating teaser trailer for the upcoming Disney film “Beauty and the Beast” with comments from its star, Emma Watson. The film opens March 17, 2017. A teaser trailer for “Descendants 2,” the sequel to the hit Disney Channel Original Movie, will also be shown. The sequel is set to premiere in summer 2017.

Set in the enchanted fairytale land of Avalor, “Elena of Avalor” tells the story of Elena, a brave and adventurous teenager who has saved her kingdom from an evil sorceress and must now learn to rule as crown princess until she is old enough to be queen. Elena’s journey will lead her to understand that her new role requires thoughtfulness, resilience and compassion, the traits of all truly great leaders.

Comments Off on ‘Elena of Avalor’ premiere to feature sneak peeks at ‘Frozen’ LEGO shorts, ‘Beauty and the Beast’, ‘Pete’s Dragon,’ and more