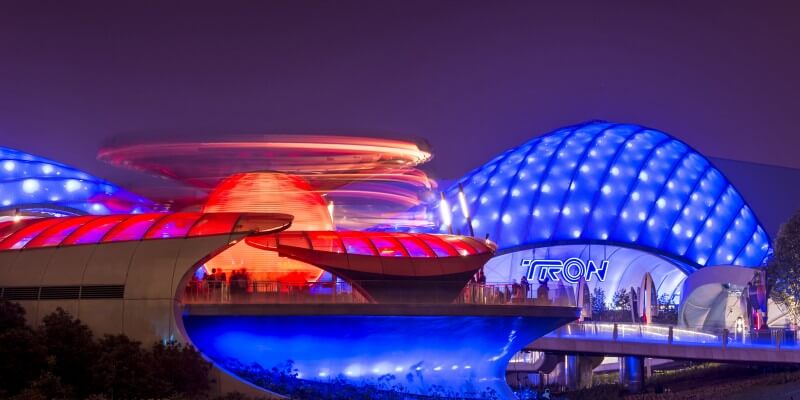 A brand new Tomorrowland has arrived for guests at the just-opened Shanghai Disneyland, which is appropriate given its name and Disney has taken it one step further by incorporating a bold new vision of the future with spectacular attractions.

Taking advantage of a blank canvas to work with, Disney Imagineers have crafted a new Tomorrowland for the next generation of theme park visitors with its innovative use of the latest technology and cutting-edge materials. And that’s just scratching the surface of what can be experienced there, with the brand new TRON Lightcycle Power Run along with the new Buzz Lightyear Planet Rescue and Jet Packs attractions all offering unique experiences united under a common theme.

What immediately grabs your attention is the sleek, aerodynamic design of the buildings and the way the lines and edges flow throughout. Nowhere is that more apparent than the new TRON Lightcycle Power Run that makes its world premiere here. As Disney notes, Sam Flynn has apparently chosen Shanghai as the location for the permanent portal between Earth and his computer world of TRON after the events of TRON: Legacy. The unique ride places guests on individual, two-wheeled Lightcycles and launched via the “Upload Conduit” through a high-speed maze of lights and projection effects within the gorgeous translucent canopy that lights up in a multitude of colors. According to Disney, the canopy — which is also bathed in light from a color-shifting ribbon that rolls around it — draws inspiration from Chinese references, “from an elegant calligraphy line to the tail of a dragon”.

A new, immersive storyline also greets guests as they experience the Buzz Lightyear Planet Rescue ride. Not only is there a new interactive targeting system with real-time feedback, the ride also features “cosmic visuals, animated targets and LED screens.” Of course, it’s always the Evil Emperor Zurg up to no good, this time threatening to destroy the peaceful planet of the Aliens. It’s up to you to help Buzz fight off Zurg and his army with more than 100 targets, the most of any Buzz Lightyear attraction at Disney parks.

Guests will have a great view of the new Tomorrowland when they strap on to the Jet Packs attraction. At the center of it all is an energy sphere that spins faster and faster as the ride progresses. Guests can control how high (or low) they want to go as they spin around, but way up top will offer the best views of Tomorrowland and the rest of Shanghai Disneyland.

Elsewhere, guests can immerse themselves in all things Jedi with the Star Wars Launch Bay that has been a hit at Disneyland and Walt Disney World with memorabilia and props from the hit movies. The otherworldly Stitch Encounter attraction has been outfitted with new humor and content for Shanghai Disneyland. Guests will enjoy the antics of Stitch as he hangs out both in outer space and in China, where he hangs out with pandas and enjoys Chinese dumplings.

Comments Off on VIDEOS: Tomorrowland at Shanghai Disneyland dazzles the senses at day and night