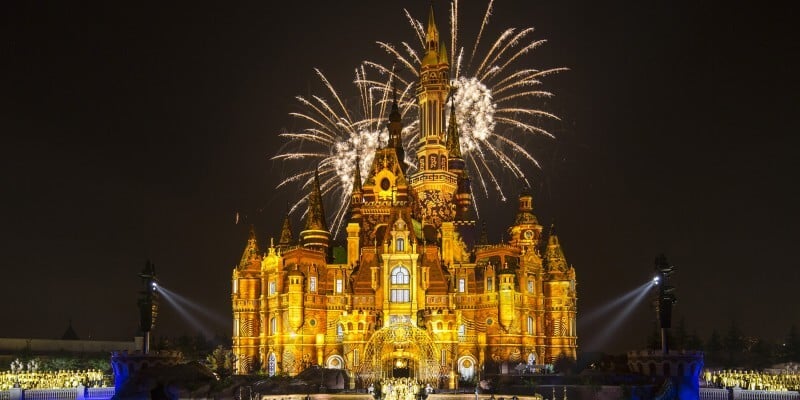 It’s been many long years in the making, but this week Disney is finally celebrating the Grand Opening of its very first theme park in mainland China. Shanghai Disneyland made its debut in style on the night of June 15th, with a nationwide broadcast on Chinese television that included a technically-dazzling and emotionally stirring performance by the Shanghai Symphony Orchestra.

Enchanted Storybook Castle was lit up with countless dramatic lighting and projection effects as internationally-famous composer Tan Dun (“Crouching Tiger, Hidden Dragon”) conducted the musicians in a performance of his brand-new composition, “Igniting the Magical Dream,” which was written specially to mark the occasion.

WATCH HIGHLIGHTS FROM THE OPENING CONCERT:

Disney Chairman and CEO Bob Iger was on hand for the ceremony, and he proudly helped introduce the new park to the world during the broadcast. “Music has always been an essential part of Disney’s legendary storytelling,” Iger said.  “On the eve of our Grand Opening, we are proud and honored to have Tan Dun tell the spectacular story of Shanghai Disney Resort through original music that perfectly captures the very soul of this special place; and we are thrilled to have such renowned Chinese artists sharing their talents to bring this magical story to life in this extraordinary, historic performance.”

The musical performance combined traditional western and Chinese motifs, along with many instantly-recognizable melodies from throughout Disney history. Several Chinese celebrities also joined in on the festivities, appearing on stage to participate in the ceremony.

Shanghai Disneyland Resort officially opens tomorrow, June 16th, but has been undergoing soft openings for the past several weeks. Be sure to visit ITM’s Shanghai Disneyland archive for many more videos and stories about Disney’s newest park.