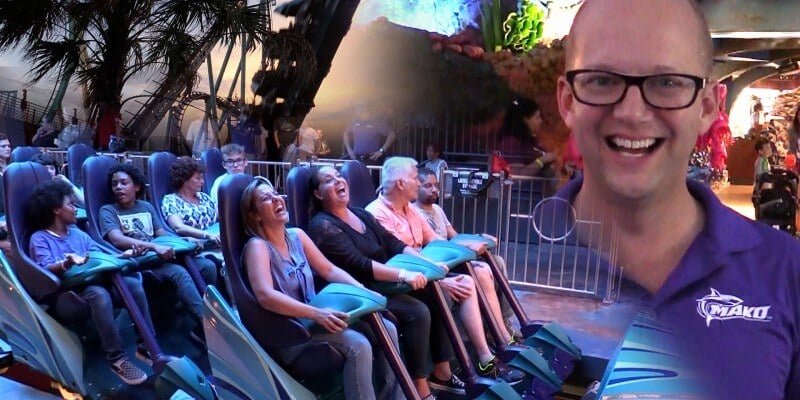 Mako is now officially open and taking guests by storm at SeaWorld Orlando. The new hypercoaster reaches speeds of up to 73mph and has a massive 200-foot drop that is sure to lift you out of your seat!

I had the opportunity to kick off Mako’s opening with a bang at an evening excursion through the all-new Shark Wreck Reef (the fun, shark-oriented area surrounding the coaster) and even shared a few minutes with Brian Morrow, the creative director of SeaWorld Orlando to chat about the trials and tribulations of opening such a massive new attraction.

You can take a look at the full video here:

The line queue itself was pretty neat, giving you an under-the-dock perspective of a shark slowly hunting for its prey. But the real star of the show was the launch sequence at the load-in area of the coaster: guests would casually see fish (via screens) swimming above their heads, until the ride is set to take off and a giant school of mako sharks come careening forward, ushering the ride car forward. It’s a great little aesthetic that really adds to the take-off experience.

Once you take off…well, see for yourself:

Oh, and in case you’d like to learn more about the Mako shark, here’s Adam and a few friends from ThrillGeek and Orlando Informer with five facts on the ocean predator — while screaming their faces off on the actual hypercoaster:

And that’s it! Mako is an incredible experience that deserves a place among the greats, and it’s right here at SeaWorld Orlando! So what do you think? Are you ready to come face-to-face with Mako? Let me know what you think in the comments below and, for all things thrilling, stick with ITM!