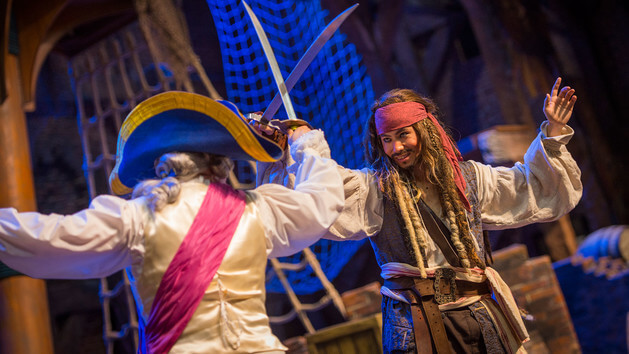 Laugh, cheer and scream as Captain Jack brings outrageous antics and daring thrills to the stage in a brand new Pirates of the Caribbean-inspired show at Shanghai Disney Resort!

When the “real” Captain Jack discovers an actor is portraying him onstage at El Teatro Fandango, he vows to show this imposter—and the audience—what a real pirate can do. But Jack’s appearance draws the attention of British Naval forces, who storm the stage in pursuit. The hilarious mayhem soon spills out into the theatre as pirates, sailors and actors are caught up in a fast-paced flurry of incredible stunts and daredevil duels.

Hang on tight as the action builds to a furious finale! When the hurricane that’s been bearing down on Treasure Cove slams through the theatre, Jack and his foe are swept up into the most breathtaking swordfight ever!

Comments Off on VIDEO: Experience the “Eye of the Storm: Captain Jack’s Stunt Spectacular” show from Shanghai Disneyland