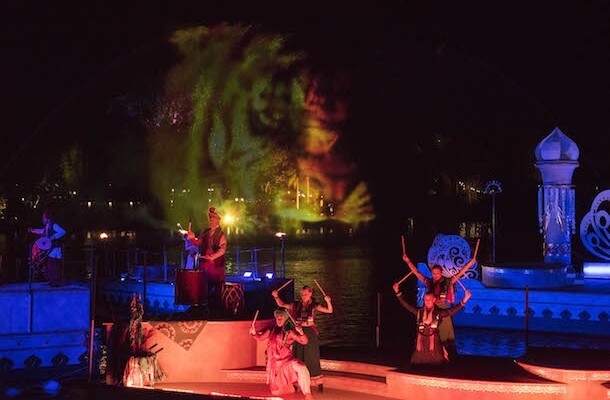 Yeah, you read that right: I really had a great time with The Jungle Book: Alive With Magic nighttime show at Disney’s Animal Kingdom. Is it perfect? Nope. But what Disney theme park production is? Relax.

I’ve seen many opinionated theme park fans railing on this show, claiming it’s a slap dash desperate attempt to fill time while the Disney Imagineers prep the proper technology for Rivers of Light, which was originally scheduled to be open by now. Personally, what I found was a lively spectacle with a solid narrative, and a splendid way to spend twenty minutes of my life.

I admit, I’m not entirely sure what all the scoffing “get off my lawn” types are complaining about. It told the story of the film well, and it was highlighted by over-the-top Bollywood craziness. The choreography was fun, the massive (like MASSIVE) cast was a spectacle in and of itself, and the projections were vibrant and creatively-placed. My only gripes with The Jungle Book: Alive With Magic involve there not being any real, loving introduction to our three vocal leads in the center. Why are they there? Why should we be paying attention to them? And no “because they’re the ones singing the songs” isn’t a valid reason, not when there are so many things going on at once on those stages. Another issue I had involves the fact that the show doesn’t kick off with a bang — as in, everybody just kind of *arrives* and then the story starts. I would have liked a big, musical overture, or something maybe a little more “welcome to this huge, magical show” instead of the slow opening of a book as a water projection.

But the talent was there, and it was a really entertaining way to preview the new on-lake experiences that Animal Kingdom’s nighttime festivities have to offer. Also, props to the line queue attendants for getting everybody into the arena and seated with absolutely zero stress. Seriously, pat yourselves on the back.

Overall, it was an enjoyable experience and a pleasant way to close out an evening in Disney’s most original park. Congrats to the cast and crew!

Check out full video of the show below:

So what do you folks think of The Jungle Book: Alive With Magic? I know you folks have opinions, and I want to hear ’em! For all things Disney Parks, stick with Inside the Magic!