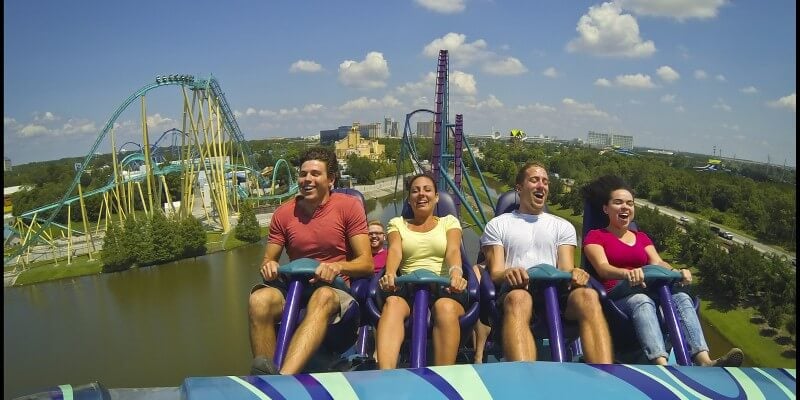 If you’ve been following our continuous coverage leading up to the official unveiling of SeaWorld Orlando’s new 200-foot tall hypercoaster Mako, you know guests will be in for quite a treat when it officially opens this Friday.

Mako is SeaWorld Orlando’s fifth coaster and is the tallest, fastest and longest roller coaster among Orlando’s popular theme parks. Reaching speeds of up to 73 mph, the new attraction anchors a two-acre area known as Shark Wreck Reef, which includes SeaWorld’s existing Shark Encounter attraction, and interactive learning exhibits as well as dining and shopping options for guests. SeaWorld Orlando notes that Mako is one of the few actual hypercoasters in the world, “a group of roller coasters known for high speeds and steep drops and hills that create a feeling of weightlessness or ‘air time.’ As the sleek coaster cars crest each hill, riders — secured only at their laps — float out of their seats, nearly weightless.”

“For almost three exhilarating minutes, you experience life as an apex predator,” said Brian Morrow, SeaWorld’s Vice President of Theme Park Experience and Design. “You surge through the water at top speeds, charge to the ocean depths and chase prey throughout a massive reef.”

Based on early reports from ITM’s own Adam McCabe, it appears that Mako accomplishes all of that and much more. Guests will also be treated to an immersive area that incorporates elements of a living ecosystem at the bottom of the sea near colorful corals, a two-story fishing pier and not one but two shipwrecks. Your eyes will also be in for a treat, with a 48,000-watt, intelligent surround-sound system plays an original soundtrack throughout the area.

Additionally, as part of a renewed focus on animal conservation and education, SeaWorld is also taking advantage to spread the word about the plight of wild sharks. Several interactive learning stations have been installed so that guests can discover how different species are classified, what sharks like to eat and also to dispel widespread misbeliefs about these majestic creatures that are so vital to the world’s ecosystem.

“It’s really eye opening to learn how sharks are struggling in the wild,” said Mills. “We believe the more people exposed to this message means more people making informed decisions, and sharks’ odds of survival improve.

“As we designed and built this new realm, the educational component was a top priority. We want guests to leave excited and exhilarated by what they experienced here, and we also want them to leave inspired by what they learned here. Sharks are in peril throughout the world and we can all do something about that — that’s our message.”

We’ll have more on what’s in store for thrill seekers soon, so keep it here at Inside the Magic for much more!