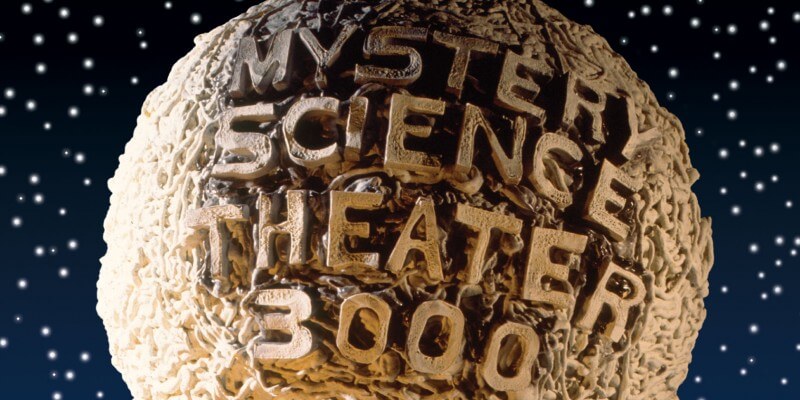 In the not too distant future, on June 28th, the guys from Rifftrax (Michael J Nelson, Kevin Murphy and Bill Corbett) will be staging a reunion of their old stomping ground: Mystery Science Theater 3000!

In a special live broadcast that will be beamed across theaters nationwide, Nelson, Corbett and Murphy will be reuniting with MST3K series creator Joel Hodgson and fellow cast members Trace Beaulieu, Frank Connie, Mary Jo Pehl, Bridget Nelson as well as most of the new iteration of the series including Jonah Ray.

For those who don’t know, Mystery Science Theater 3000 lasted from the late 80s all the way through the 90s on Comedy Central and Syfy. Show host Hodgson (and later Michael J Nelson) along with robots Tom Servo (played by Josh Weinstein for one season and Murphy the rest of the series run) and Crow T. Robot (Beaulieu and later Corbett) would be forced to watch horrible movies, “the worst we could find” according to the show’s theme song. As they watch the movie, Hodgson and company would make fun of the movie as it was aired on TV. So picture watching a movie on TV, but with a commentary track.

Some of the schlock featured on MST3K were Manos: Hands Of Fate, Godzilla vs. Megalon, Secret Agent Super Dragon, Danger!! Death Ray, Revenge Of the Creature and Santa Claus Conquers the Martians.

The show ended in 1999, but in 2006 Michael J Nelson, Corbett and Murphy launched Rifftrax, a website where they release MP3s of humorous commentary tracks for modern movies like the original Spider-Man trilogy, every Star Wars film and Jaws. They also riff educational and how-to shorts from the 50s, 60s and 70s.

The upcoming MST3K reunion won’t be their first live event. They’ve done live shows broadcasted across movie theaters in the US before and riffed such movies as Starship Troopers, Night Of the Living Dead, the Room and Santa and the Ice Cream Bunny.

As a fan of Rifftrax, I am really looking forward to this event. I am not too familiar with their previous work on Mystery Science Theater 3000, but it will be fun to see the Rifftrax guys back with their old comrades as they riff various shorts.

If it’s anything like their previous live events, fans will sure be in for a treat!

Tickets for the event on June 28th at 8PM can be bought at this link.

Comments Off on Rifftrax goes back to its roots with a live MST3K reunion show!