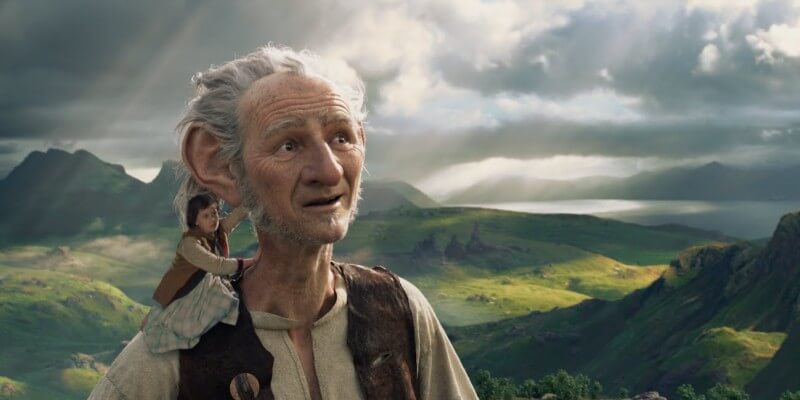 When you’re a kid, everything seems bigger. Renowned children’s author Roald Dahl knew this when he wrote the book “The BFG” in 1982, and the concept carries over into the new Disney/Amblin Entertainment live-action film adaptation directed by Steven Spielberg, which opens July 1st.

The story of “The BFG” centers around a young girl named Sophie (newcomer Ruby Barnhill) who is being raised in an orphanage in London. Like many protagonists, Sophie dreams of adventures outside of her humble upbringing. She suffers from insomnia, and stays awake late at night perusing the mail and sneaking around the orphanage with her cat by her side.

One night Sophie’s wishes for excitement are granted when she encounters the titular “BFG” (Big Friendly Giant,) played as a CGI motion-capture character by recent Oscar winner Mark Rylance (“Bridge of Spies.”) Pleasantly benign and endearingly simpleminded, the Giant has made it his life’s work to travel stealthily around the city after dark and plant bright, firefly-like dreams in the minds of its inhabitants via an enormous trumpet.

“The BFG” is a very simple story about the friendship that forms between the Giant and Sophie, after he kidnaps her to prevent her from spilling the beans to others about his existence. The BFG takes Sophie back to his home in Giant Country, where his much bigger cousins (Jemaine Clement, Bill Hader, et al.) prove to be worthy adversaries who relentlessly bully the BFG and want only to eat humans. Together, Sophie and the BFG must team up to find a way to bring down the less-friendly giants once and for all.

This movie may have the youngest target audience of any Spielberg movie in his long and storied career, but the tone matches the source material written by Dahl, who also penned the novels “Charlie and the Chocolate Factory” and “James and the Giant Peach.”

“The BFG” is filled to the brim with silliness and nonsense-speak that will likely delight children under a certain age. There is even an extended sequence near the end that features plenty of noisy (and colorful) fart jokes. On the other side of that spectrum, there is also an awe-inpiring sequence near the middle of the film, where Sophie and the BFG go dream-hunting in a stunningly beautiful dream-like nighttime landscape. Both of these scenes are memorable for very different reasons, and the movie’s sense of humor and imagery are both destined to stick in youthful viewers’ minds.

Despite the extremely young demographic the movie is going for, parents will undoubtedly find charm in the characters and situations. It goes without saying that Spielberg remains a master craftsman when it comes to gorgeous shot composition and getting performances out of actors in effects-heavy cinema. The one sour note I must mention is that the extensive CGI work is occasionally unconvincing, especially when the Giant must interact with live-action characters and other elements.

Nevertheless, the movie on the whole is undeniably engrossing (if a tad overlong,) and kids and parents alike will surely get swept up in Sophie’s exploits with the BFG.