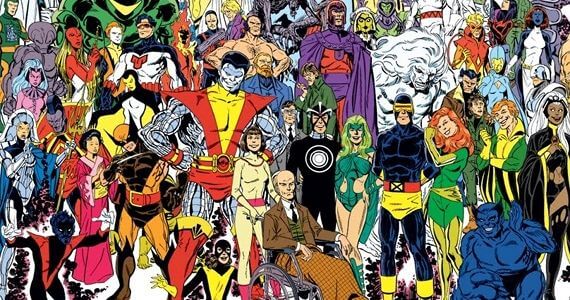 Now that X-Men: Apocalypse finally hit theaters, you might be thinking of picking up some X-Men comics and reading about the merry band of mutants who changed the landscape of Marvel Comics forever. Not joking. From the mid 70’s till around the mid 00’s, the X-Men titles were the premiere titles for Marvel. If you wanted to know what books the Marvel universe revolved around, you read an X-Men book. It was an X-Men world and Spider-Man, Daredevil and the Avengers were just living in it.

And just like when Captain America: Civil War came out, I am here to give you more of my recommended reading!

To understand the X-Men, you’ve gotta go back to where it all began. With this trade paperback featuring work by the legendary duo of Stan Lee and artist Jack Kirby, you’ll see the very first story of the X-Men (Cyclops, the Beast, Ice Man and Angel) when new student Jean Grey comes along and helps Professor X’s new team fight off Magneto and the Evil Brotherhood of Mutants. While some of the stories might be a little silly compared to ones told today, these laid down the foundation for an entire concept of the Marvel universe: Mutants and their never ending struggle for acceptance by society. Plus, you get outstanding artwork by Kirby.

Some of you reading this might not know, but for a while the X-Men comic was canceled and Marvel just released reprints. Things changed for the better in 1975, when the X-Men made their big comeback with a new team lead by Cyclops with brand new and exciting characters like Colossus, Storm, Nightcrawler and Banshee. The new team featured two other characters that didn’t last long like Sunfire and Thunderbird. But the most notable addition was a character who first appeared in the Incredible Hulk issue 181 (or issue 180 if you count that one single panel if you want to be difficult) named WOLVERINE! With stories by Chris Claremont and art by Dave Cockrum, it’s the stories in this collection that took the X-Men to a whole new level.

X-Men: Days Of Future Past

One of the landmark stories in X-Men history features Kitty Pryde aka Shadowcat in the dystopian future of 2013 where mutants are hunted by Sentinels as she sends her conscious back to 1980 in order to prevent said future from occurring. With writing by Chris Claremont and John Byrne as well as art by Byrne, this story became a classic and set the standard for X-Men stories. The cover to the first issue of the story arch (and cover to the trade paperback) is on of the most famous comic book covers in history.

If you want to see where Apocalypse originated, then get this book. In the mid 80’s, the original X-Men lineup of Cyclops, the Beast, Angel, Ice Man and Marvel Girl (Jean Grey. Yup. She had a codename) broke off from the X-Men and formed their own group called X-Factor. They would pretend to be normal humans, hunt down mutants, “arrest” said mutants but secretly train them to control their powers so they can go undetected in society.

No X-Men list would be complete without mentioning this book. In 1991, Marvel gave the X-Men their second monthly title simply called X-Men. Featuring longtime X-writer Chris Claremont scribing the stories and superstar artist Jim Lee (who both had a memorable run on Uncanny X-Men) at the helm as artist and co-writer of the series. Here we see Magneto capture and brainwash one team of X-Men, and another X-Men team needs to rescue them. What made this series so memorable are two things. First, it was in this series where the X-Men got their now classic looks thanks to Lee redesigning the costumes. Also, the first issue of X-Men is actually the highest selling single comic book of all time, selling over 8 million copies in its first month thanks to the multiple covers Lee drew.

Not only is this one of the best Wolverine stories to date, it is probably one of, if not, the most important one. Written, drawn, inked and colored by Barry Windsor-Smith of Conan the Barbarian fame, we see exactly how Logan went through the Weapon X program and became the Canuckle head we know and love. Until this story came out, readers didn’t have a clue as to how Logan got his claws and became the Wolverine!

One of my all-time favorite comic book series was Ultimate X-Men. It was set in the Ultimate universe where the heroes you and I love originated today rather than in the 60’s or 70’s. It made Marvel feel fresh and new. Written by Mark Millar and drawn by Adam Kubert, you see the first story of the Ultimate X-Men where Magneto hires Wolverine as an assassin to infiltrate and kill Professor Xavier. This particular series attracted a lot of talent in the comic industry like artists Andy Kubert, David Finch, Stuart Immonen as well as writers Brian Michael Bendis, Brian K Vaughn, writer of Y: the Last Man and Robert Kirkman, who you all know as the writer and creator of the Walking Dead.

One of my favorite particular runs on Ultimate X-Men was when writer Brian Michael Bendis took over the book with artist David Finch. Featuring outstanding writing by Bendis and top notch art by Finch, we see the introduction of Angel who people worship as an actual angel, a new version of Emma Frost leading her own X-team as well as a memorable stand alone story of Wolverine needing to kill a teenage kid whose newly developed mutant power kills everyone and every living thing around him. When Bendis and Finch were on this book, it always was on the top of my pile of comics.

Writer/director/producer Joss Whedon and artist John Cassaday ushered in a new era for the X-Men when they were on this particular title. The first story arch features the X-Men and the mutant community facing the dilemma of being given what is being called a cure for the X-gene. If given the cure, they would be rid of their powers and become regular people. Whedon told an excellent story and Cassaday did some of his best artwork ever during their run together. There are three other volumes by Whedon and Cassaday. If the plot sounds familiar, it is because it was loosely adapted for the 2006 movie X-Men: the Last Stand.

As usual, these books are available on Amazon, at Barnes and Noble or your local comic shop. If you think I left out a story arch or have a particular favorite one you want others to read, let them know in the comment section below.