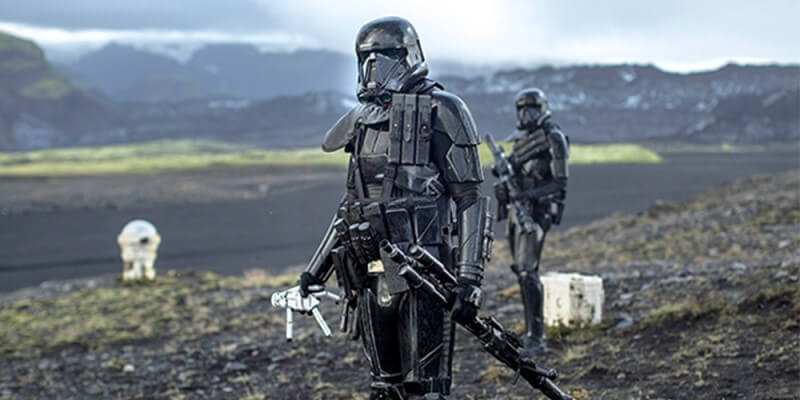 Just when you thought you couldn’t get anymore hype for the newest chapter in the space opera saga, Entertainment Weekly drops a handful of all-new photos from Rogue One: A Star Wars Story.

The images show an extended glimpse at the new darker storm troopers taking over a beach, as well as new photos of our rag-tag group of Rebels looking to steal the plans for the Death Star.

Check them all out below:

Rogue One: A Star Wars Story, also known simply as Rogue One, is an upcoming live-action Star Wars film, the first in the Star Wars Anthology Series. The film, set for release on December 16, 2016, is directed by Gareth Edwards and produced by Lucasfilm president Kathleen Kennedy, amongst many others. Gary Whitta worked on the first draft of the screenplay throughout 2014, and Chris Weitz took over final screenwriting duties in 2015. The film is based on a story concept from John Knoll, Chief Creative Officer/Senior Visual Effects Supervisor of Industrial Light & Magic. The film’s score is composed by Alexandre Desplat, marking the first live-action film in the official Star Wars canon to not be scored by John Williams.

The film, which began production in August 2015, is set betweenRevenge of the Sith and Star Wars: Episode IV A New Hope. It is set closer to the latter film and focuses on the efforts of the Rebel Allianceto steal the plans to the Death Star, an event that was referenced in the opening crawl of A New Hope. Jyn Erso, played by Jones, and a group of other characters band together to steal the plans from the Galactic Empire. Edwards has described the film as a grounded, war-based movie, one in which normal people have to come together to fight the Empire as opposed to relying on the Jedi or the Force.

So what do you think? What the heck is with this giant beach saddle that we keep seeing so much of? Let me know in the comments below and stick with ITM for everything Star Wars!

Comments Off on PHOTOS: Check out 16 brand new photos from “Rogue One: A Star Wars Story”!