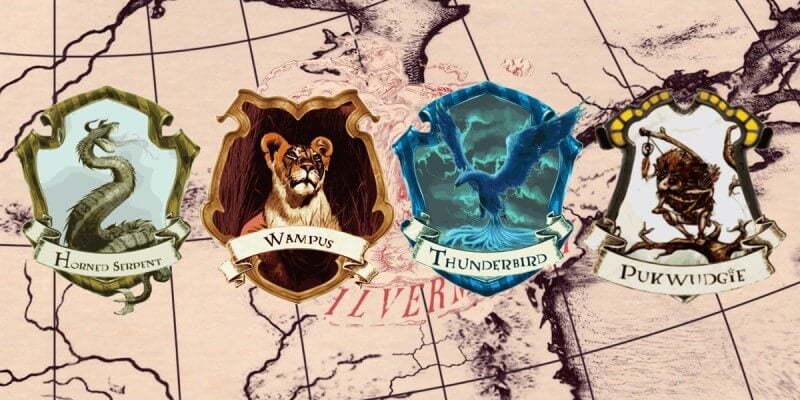 Harry Potter and Fantastic Beasts author J.K. Rowling dropped the mother of all information bombs on fans today when she revealed the entire backstory of Ilvermorny, the American wizarding school, via Pottermore. But what do these houses mean? Are they anything like the Hogwarts houses that we’ve grown to know in love? Well I’ve done a little digging, and Entertainment Weekly has done a pretty bang-up job of spelling them out for us. The full descriptions of each house and what they mean are below, and all houses share a rich backstory with the history of the school. Have a look for yourself — where are you sorted?

Description: Each of the four Ilvermorny houses is said to represent a different part of the ideal wizard. Thunderbird is the “soul” and “favors adventurers,” according to the Pottermore description.

Initial reaction: The creature (whose name has been adopted by not one but two different X-Men) has the power to bring storms, so it’s no wonder the house is associated with the soul. Searching one’s soul and getting in touch with the deeper aspects of one’s being can often be a stormy process. And bonus, J.K. Rowling is a Thunderbird.

Description: The Horned Serpent is said to represent the mind of a wizard, and favors scholars. Because of that whole aura, it’s easy to imagine Horned Serpent students remaining a little aloof from their brethren.

Initial reaction: The jewel in its head, the enigmatic riddles to Ilvermony founder Isolt Sayre, and the use of its horn in creating the first Ilvermony wands – all cool stuff.

Description: The Pukwudgie, true to their namesake creature’s role in protecting Isolt Sayre from her deadly aunt, represents the heart of a wizard, and favors healers.

Initial reaction: William the Pukwudgie is easily the best character in the story of Ilvermorny’s founding. For all their caring nature –William still lays mayflowers on Isolt’s tomb, centuries after her death – Pukwudgie students maycarry their own version of the creature’s trademark poisoned arrows. Don’t mess with them.

Description: Wampus represents the body of a wizard and favors warriors.

Initial reaction: Wampus is one of the most difficult houses to read at this point. Unlike the Pukwudgie and Horned Serpent, the creature, a kind of panther-cat hybrid capable of standing on all fours, does not factor into the story of Ilvermony’s founding. An interesting insight can be found in Cherokee myths, however. They tell the story of a woman named Running Deer who shapeshifted into a Wampus using a magical mask in order to defeat a terrifying creature that had driven her strong, brave husband insane. Don’t write off Wampus as one-dimensional and strong; warriors come in all shapes and sizes.

So what do you guys think? What’s your house, and where do you feel you fit in within the halls of Ilvermorny? Let me know in the comments below and, as always, stick with Inside the Magic for the best news from the wizarding world!