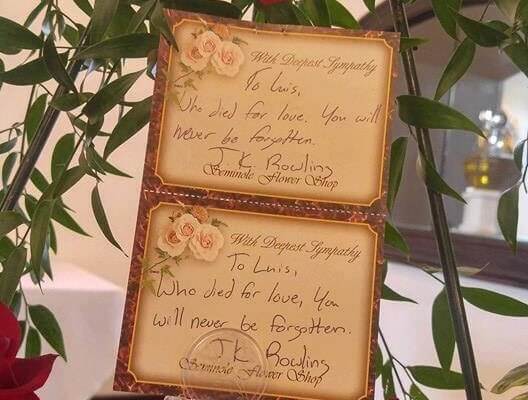 Harry Potter author J.K Rowling has always been very personally involved with her huge fanbase and in the aftermath of the horrific Orlando Pulse nightclub shooting it became clear exactly how much. Amongst the 49 victims of the attack in Orlando was Universal Orlando’s Wizarding World of Harry Potter employee Luis Vielma, he also happened to be a huge Harry Potter fan. On Monday when Luis death became known J.K. Rowling tweeted the following message: Buzzfeed now reports that in a continuing show of support of Luis and his family, Rowling sent flowers to his funeral to offer her condolences. A large wreath made of red flowers and included a note in the center. “To Luis, who died for love. You will never be forgotten. J.K. Rowling.”

I swear JK Rowling is the sweetest human on the planet. pic.twitter.com/OY455s2632

Luis family knew how much he loved his Harry Potter world and made sure to point that out in his obituary. “He loved being able to go and be part of that every day he worked. There was no greater experience for him at this time.” Earlier this week a vigil was held at the Wizarding World of Harry Potter in both Orlando and Hollywood, where tons of Harry Potter fans gathered and raised their wands in tribute to Luis and the other 48 victims.

Comments Off on J.K. Rowling pays tribute to Orlando shooting victim by sending flowers to his funeral