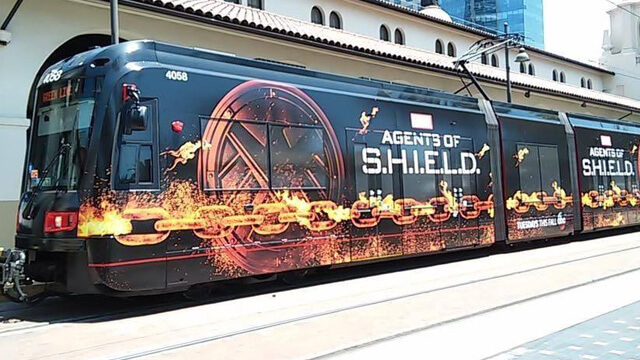 It looks like ABC and marvel entertainment has just released a very intriguing tease of what may come when Marvel’s Agents of SHIELD returns to living room TV screens this fall. Apparently, A San Diego trolley has been scanned with a very telling and intriguing teaser image reading “Get fired up!” “Marvel’s ‎Agents of SHIELD‬ knows how to get to you ‪SDCC‬ in style.”

Wait a minute — is Ghost Rider on his way?

There’s no real way of knowing until an official announcement is made, but it’s definitely worth speculating. Granted,  the Secret Warriors‘ character J.T. James (Hellfire) also weilded a flaming chain, but ghostwriter is far and away the more popular character of the Marvel universe. A neat little blurb from ComingSoon.net:

Before Marvel Comics even existed, the western hero known as Ghost Rider made his debut in 1949’s “Tim Holt #11.” By 1967, the Ghost Rider copyright had lapsed and Marvel Comics began publishing their own version of the cowboy hero. Batting evil on horseback, Carter Slade dressed in a phosphorescent white outfit to take on evildoers. Five years later, Marvel Comics introduced the Johnny Blaze version of Ghost Rider, a contemporary supernatural antihero who, after making a deal with the devil, battles evil atop a motorcyle. With the success of the Blaze Ghost Rider, Slade became retroactively known as the Phantom Rider.

In the comics, J.T. James is the grandson of Phantom Rider Carter Slade and, from him, inherited the Hellfire chain. Although no such history has, as of yet, been made a part of Whitehead’s take on James, it’s looking pretty likely that we’re going to learn a whole lot more about James’ history in season four.

So what do you folks think? Are you ready to potentially see Ghost Rider try his hand at the small screen? Either way, it would be great to see the character in the hands of Marvel Studios. Let me know in the comments below, and stick with ITM for all things awesome!