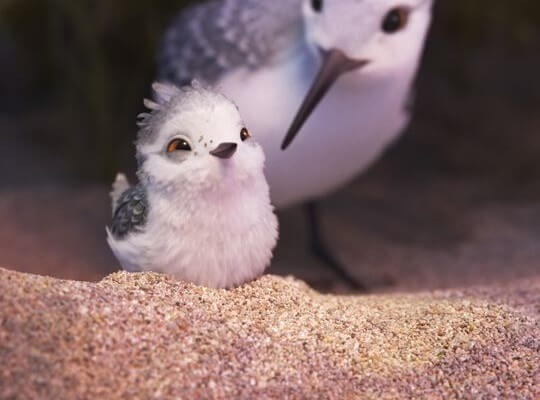 Any true Pixar fan knows that not only is a new movie from Disney’s powerhouse animation studio cause for celebration but so is the original short that precedes it. In the case of Finding Dory, which opens in theaters on June 17, fans will be treated to possibly the most adorable short in their rich history with Piper.

As John Lasseter and other Pixar executives have explained over the years, these shorts have been critical since the very start of the studio, long before they released their first full-length movie Toy Story in 1995, to help their filmmakers and animators develop and hone their storytelling skills as well as experiment with new techniques. Speaking to USA Today, the Pixar creative team discussed the creative process in developing Piper, the titular character who is a baby sandpiper learning the ropes out on the beach in her quest to find food.

First-time director Alan Barillaro features the adorable beach bird and her mother in a tale of unheralded bravery — tiny Piper leaving the nest for a world filled with treacherous ocean waves.

“This is a story about conquering and overcoming your personal fears — in this case, the water,” Barillaro says. “This is a tale of how to grow up in a world that seems so large and intimidating with the courage to get past those fears.”

After finishing his stint as supervising animator on Pixar’s 2012 hit Brave, Barillaro was inspired by birds scurrying around the surf for food while he was running along a Northern California beach.

“Those birds on the shore always looked like they were tearing around in fear, like they were scared of the water,” Barillaro says. “That was the impetus of the idea.”

Lasseter and Finding Dory director Andrew Stanton encouraged Barillaro to flesh out a six-minute story and they enlisted the aid of world-class guitarist Adrian Belew to work on an original score and help out with bird sound effects. Cuteness overload aside, the short will likely please both kids and parents alike with its universal story that applies to all creatures both big and small.

“There’s also the parent aspect, personal to me,” Barillaro, a father of three, tells USA Today. “Letting your kids grow up, make mistakes and not hovering over them. The mother piper is the parent I wish I was — being there for your kids, but giving them space to grow.”

Both Piper and Finding Dory can be enjoyed at theaters beginning June 17.

Comments Off on First Look: Get to know Piper, the adorable star of Disney-Pixar’s newest short