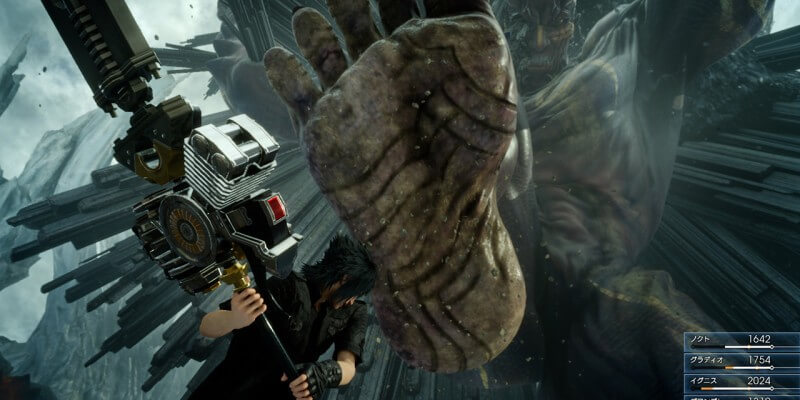 On one hand, the demo for Final Fantasy XV at E3 2016 is an astounding technical achievement, seamlessly blending gameplay and cinematic grandeur. It’s a feat of modern technology and artistic integrity that may very well deserve the accolade of “Square Enix’s most praise-worthy achievements”.

On the other hand, I felt like I was doing a lot of button-mashing in hopes of maybe (?) accomplishing my ultimate goal. Maybe that’s not fair…let me explain:

I was thrust into a stage of the game where I was required to take down the mighty Titan, a boss battle that requires quick reflexes and smart use of my abilities and weaponry. Our hero Noctis and his companions are thrust into the heat of battle, bobbing and weaving (and warping) to avoid being crushed by the giant’s feet and arms. The whole thing is really thrilling, and it’s clear that a decent amount of the story has passed by this part of the game.

On the Playstation 4, attacks were launched with the circle button, warping with the triangle button, jumps with X, and blocking with square. I would swap between weapons and magic attacks on the d-pad. Got all that? Ok, let’s keep going.

As Titan would swing at me, I would attempt to warp onto walls and other structures to get out of the way. The only issue was, I didn’t really know when to get out of the way. Sometimes, the demo would let me know when a hand or a foot was coming down, and other times, I just had to struggle through my own ability to swing the camera around at the right moment to see if my massive enemy was gearing up for another swing. In any other case, this frantic melding of attacking, dodging, and camera control would be part of the thrill — for me, it was all just a little too insane for what I was trying to accomplish.

That’s not to say that attacking enemies on the way to Titan wasn’t fun. I loved charging/warping in and taking multiple cracks at my foes while my teammates flanked them from the other side dynamically and realistically. It just wasn’t until I got to the clunky boss fight that I began getting a little frustrated.

Overall, I believe that the smaller battles of Final Fantasy XV will be one of the highlights of a player’s gameplay experience. The other, being the ability to explore a vast, open world. If Square Enix can get that clunky camera under control, we’ll have a solid gold piece of electronic entertainment on our hands.

For all things Final Fantasy XV, stick with ITM. You can check out my time with the game in some (slightly janky) off-screen footage below:

And here’s the official E3 trailer: