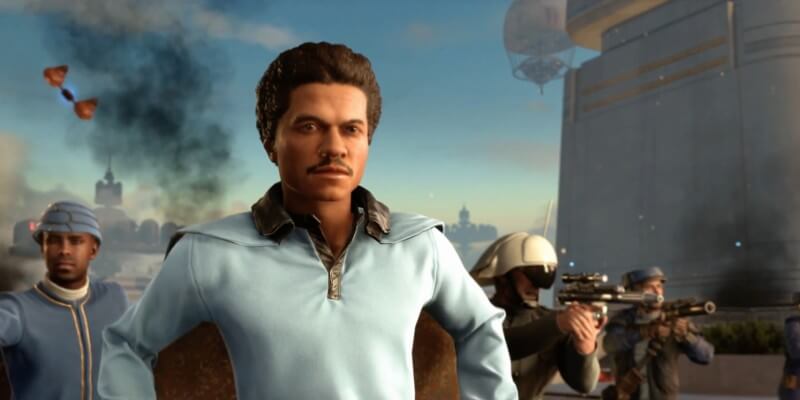 EA has unveiled new game footage as part of an update at E3 2016 on several Star Wars games they are currently developing across several platforms. The recently released video includes plenty of intriguing snippets of forthcoming titles that gamers will be eagerly anticipating and is interspersed with interviews of excited game developers eager to put the latest tech to the test with their love of the Star Wars universe.

EA offered up a roadmap of what they have in store for fans of just about any genre of Star Wars games that exists.

Following the success of last year’s Star Wars Battlefront, EA and DICE will not only be releasing more DLC content (three expansion packs and more free content) through this year but they’ll also follow that up with a new Battlefront title next year that appears to be incorporating content from prior Star Wars films as well as newer films.

No expense appears to be spared in recreating the suave and swagger of Lando Calrissian, however no gameplay footage was shown for the Bespin expansion pack for last year’s smash hit. Another expansion pack will take place on the Death Star as well as a final pack in December at a location that EA chose not to name but declared it was something they are “especially excited about”.

The new Battlefront installment is currently in development with DICE collaborating with Motive Studios in Montreal.

Updates and new content will also be produced for Star Wars: Galaxy of Heroes from Capital Games and Star Wars: The Old Republic from BioWare.

Additionally, a brand new action adventure story will debut in 2018 from Visceral Games.

“I’ve been blown away by the level of collaboration between the Story Team at Lucasfilm and Amy Hennig and the team at Visceral as they create an original, authentic narrative in the Star Wars universe,” Jade Raymond, Group General Manager, said in an EA press release. “It is an amazing example of how we’re taking an already strong partnership to another level.”

Raymond also offered up this intriguing tidbit for the future about a new 3rd person game set in the Star Wars universe and more.

“That’s not all we have in production right now. Our partners at Respawn Entertainment are making their own 3rd person action adventure game, one that features a different style of gameplay and takes place in a different timeline we have yet to explore with our EA Star Wars titles. And we’re early in pre-production on some other projects we think you’re going to be excited about as well.”

ITM will be extensively covering E3 2016 throughout the week so keep checking back for more news, exclusive video and much more!