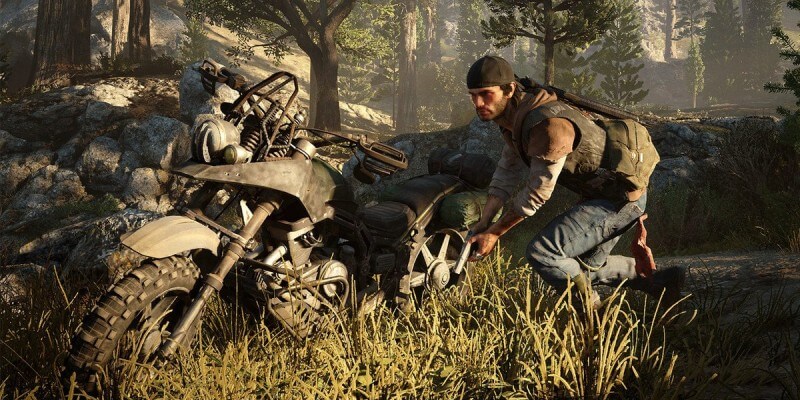 I’m going to admit, I was a little skeptical about Days Gone, Bend Studios’ new open-world post-apocalyptic romp. To me, it looked like The Last of Us meets Dead Rising with a little bit of Sons of Anarchy sprinkled in there for added grit. I mean hell, just look at the official description:

Days Gone is an open-world action-adventure game set in a harsh wilderness two years after a devastating global pandemic. Play as Deacon St. John, a Drifter and bounty hunter who rides the broken road, fighting to survive while searching for a reason to live.

At its core, Days Gone is about survivors and what makes them human: desperation, loss, madness, betrayal, friendship, brotherhood, regret, love – and hope. It’s about how even when confronted with such enormous tragedy they find a reason to live. Hope never dies.

That’s a lot to swallow. But after viewing the extended demo at E3, I’m a firm believer that we have something special with this one.Unfortunately, no filming or still photography was allowed during the demo. After speaking with the developers, it was revealed that there are multiple (very cinematic) ways to complete your objectives, and an ungodly amount of interactive objects in this lush world-gone-wrong to ensure than no two players will have the exact same experience.

Take a look at the demo below:

An alternate appropriate title for this one could also be “Anxiety Attack: The Game”. I personally love how the creatures pile and shamble together as they charge for you — reminds me of World War Z. I know, I’ve tried to forget that movie just as much as the next person. But those fleshy fiends feel like real threats, and that will go a long way in a game like this.

So what do you think? Are you ready to jump into this twisted universe with your trusty bike and take on hordes of evil nasties? Let me know what you think in the comments below, and stick with ITM for all things Days Gone!

Comments Off on E3 2016: “Days Gone” turns you into a motorcycle-riding post-apocalyptic bounty hunter