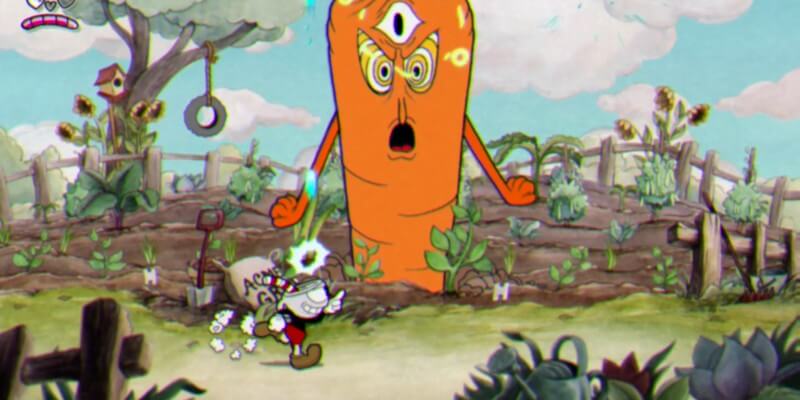 There’s a whole lot you can say about Cuphead from Studio MDHR.

The game itself has been in development for a good while now, and the art style is very clearly inspired by Disney’s silly symphonies cartoons. You know, the ones where everything is dancing in place, and most characters have an obnoxious yet creepy, toothy smile. It’s a style that, way back when, looked pretty revolutionary, but serves as an ironic throwback for this particular video game. The demo I saw at E3 2016 was that of a very complete feeling game. It plays like a combination of Contra, Super Mario Bros. 3, and Mega Man with a face-melting difficulty level and co-op gameplay. The user takes control of Cuphead, spritely young fellow with the power to shoot balls of energy from his finger guns. The rest is all style. Throughout the game, the player encounters lush landscapes rife with dancing, smiling enemies just waiting to take you out. The demo capped off with the boss battle in the middle of a vegetable garden, where the players face off against a giant carrot.

I’ll let the video take care of the rest:

Cuphead will be released on Xbox One and PC some time in 2016 for Xbox One and PC, and I can’t wait to get my hands on the final product. And watch it beat me senseless. For all things awesome, stick with ITM.

Comments Off on E3 2016: “Cuphead” video game is like a twisted Disney Silly Symphonies cartoon come to life!