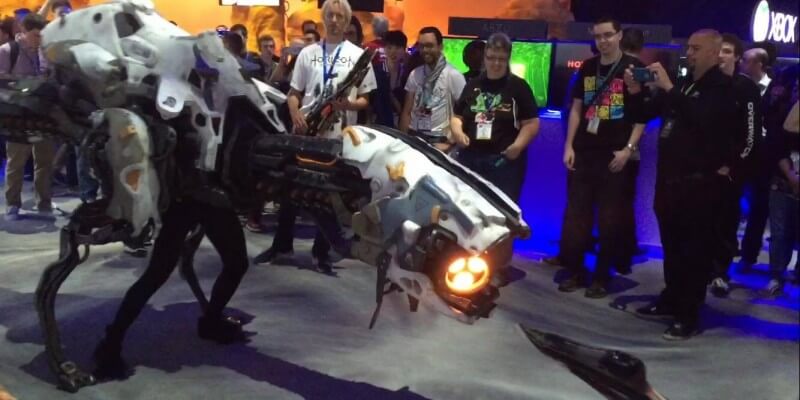 Ok, so this is pretty incredible.

So I’m walking around the E3 2016 show floor and I here an electronic cooing behind me. Considering I’m at a video game convention, I pay it no mind and continue walking.

Suddenly, I turn around as a massive metal dinosaur creature looms up above me on two legs, screeching creepy techno-gibberish! I let out a muffled gasp-shriek. Everybody laughs. I feel like an idiot. This was of course the Watcher from Guerilla Games’ Horizon Zero Dawn that has been awesomely stalking guests of the convention. The outfit is incredible and isn’t unlike the costumed dinosaurs that we have seen at theme parks and other themed events.

Check out guests interacting with the creature here:

Eventually, they had guests throwing blow-up spears at the creature. You see, this is a large part of the gameplay in Horizon Zero Dawn, as you play a member of a tribe in the post-machine-apocalypse. As you can see, the creature was really freaking people out. It was a brilliant marketing maneuver.

Comments Off on E3 2016: A living Watcher from “Horizon Zero Dawn” preys on convention guests!