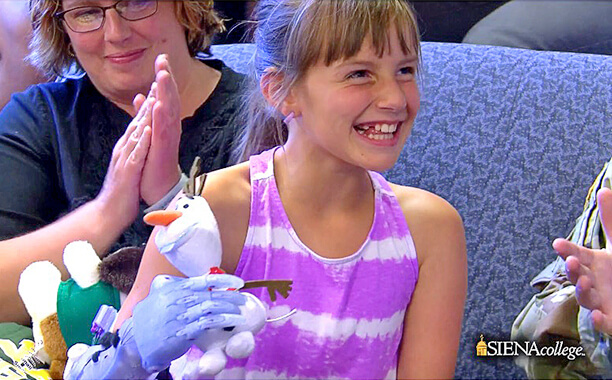 As a child there is nothing more magical than Disney and for one young girl born without her right hand, a true Disney magical moment happened. EW is reporting that students at Siena College in upstate New York put their talents to good use to create a Frozen-themed prosthetic arm for 9-year-old Karissa Mitchell.

Hours were spent designing the 3D-printed arm and to make it even more special they incorporated elements from Mitchell’s favorite Disney movie Frozen. The arm got a ice-blue color and a removable Olaf light, which according to Mitchell’s mom made her daughter feel very Elsa-like.

#ThatMomentWhen you pick up Olaf with your new Frozen-themed arm for the first time. Brought to you by @ENABLESiena pic.twitter.com/pwTGq4mw8W

“Karissa really identifies with Elsa because she knows what it’s like to be different from everyone else,” her mother, Maria Mitchell, said. “She doesn’t want to be seen as different, which has made her extremely determined to do things as well, if not better, than others.”

Karissa’s mom got the idea of contacting the school after hearing about their first project, an Iron Man-themed prosthetic hand created for a 5-year-old in Ohio.

Stories such as this is just one example of how the magic of Disney can help empower both children and adults alike.