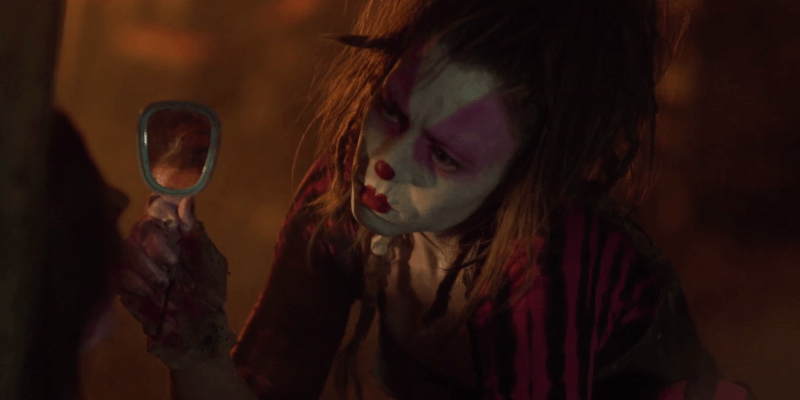 I seriously have too many friends who are terrified of clowns. Do they all meet somewhere like a club? Do they have T-shirts? Is there a support group? Well either way, you don’t have to be a clown-o-phobe to get the heeby-geebies after watching the trailer for Clowntown.

The plot? It’s not necessarily reinventing the wheel, but with scares like these, you don’t need to. A group of friends get stranded in a seemingly deserted town and find themselves stalked by a gang of violent psychopaths dressed as clowns. That’s it. Ready, GO.

Our friends at iHorror report:

Clowntown comes from debut director Tom Nagal with Jeff Miller (The Burning Dead) serving as writer and producer. It’s also worth noting David “House” Greathouse of SyFy’s Face/Off notoriety, is behind a great deal of the makeup and special effects for the film, as well as playing of the psycho clowns alongside former pro wrestler Chris Hahn who is credited as the “Machete Clown”. For more information on Clowntown, check out their official website. No release information has dropped yet, but I’m sure it will be available soon enough. In the meantime, what did you think about that trailer? Creepy, right? Let me know your thoughts in the comments below!