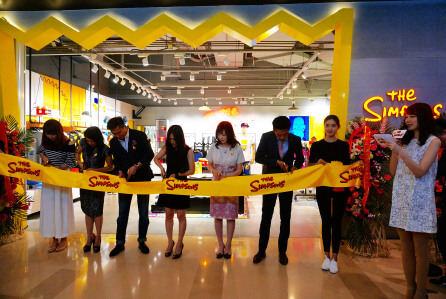 “The Simpsons” has been a worldwide phenomenon since the series originally premiered in 1989, but outside of Universal theme parks here in the United States, there has never been a permanent, fully-dedicated Simpsons merchandise-themed store.

That all changed this week with the grand opening of the world’s first “Simpsons Store” at the Taikoo Li shopping center in Beijing, China. The store offers a wide array of hand-picked memorabilia, many of which is unavailable anywhere else.

Jeffrey Godsick, president of 20th Century Fox Consumer products, had this to say about the opening:

We are delighted with the rapidly growing enthusiasm for The Simpsons brand across the Asia Pacific region. No matter the customer — a family, a high-end shopper or a fashionista — The Simpsons store in Beijing offers that unique consumer engagement with one of the world’s most celebrated properties. The development of this one-of-a-kind retail environment has been a true collaborative effort between 20th Century Fox Consumer Products, Her-Chain and Gracie Films; we look forward to launching future stores for The Simpsons together.

Comments Off on The world’s first Simpsons Store opens in Beijing, China