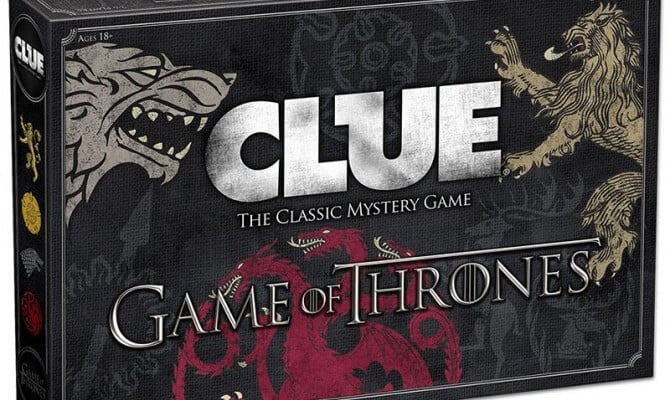 What? A MURDER in the Red Keep (or, if you flip the board over, Meereen)?!  We can almost picture George RR Martin hovering over this game board!

What was originally an April Fool’s gag via Think Geek is now a real Game of Thrones version of the classic Clue detective game via HBO. It’s an almost perfect (if not slightly less bloody) way to experience the intrigue and scheming of the series with weapons like a vail of poison, battle axe, crossbow, Dothriki arakh, assassin’s dagger and even the faceless man. The game includes Intrigue cards (13 Master of Whisperers and 8 White Walkers) and a dozen characters from the show as suspects in the game, 2-6 players, perfect for keeping the excitement of the show as mysterious as the release date of Martin’s next novel in the series. The game retails for $50 on HBO’s Game of Thrones website. (images and info via same site)

Also worth noting, there are also Game of Thrones variations of Risk and Monopoly!