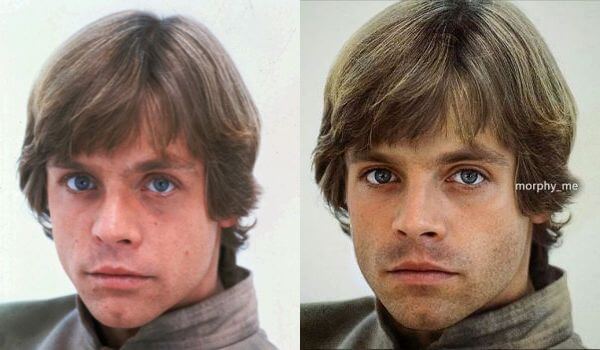 Two of the most popular stars from the Disney owned properties Marvel and Star Wars may have something more in common that just their employer. Captain America: Civil War‘s Sebastian Stan and Star Wars‘ Mark Hamill seem to also share the same face.

Talk about the stars’ similar complexion is nothing new in the fan community.The comparison between Stan and Hamill got so much attention that Stan even responded in an Instagram comment, saying he had auditioned for Star Wars: The Force Awakens early on.

Sebastian Stan finally saw the comparison between him & young Mark Hamill and will consider trying for the role! pic.twitter.com/AM9CqIzHBK

But when this new side-by-side photo found its way onto Twitter most people’s minds were blown away. The image, thanks to some Photoshop help, shows Stan’s face but with Hamill’s Luke Skywalker hair.

The image definitely takes some liberties combining the two photos and morphing the actors together, but the similarities are uncanny.

Both Hamill and Stan have also posted the support of each other online.